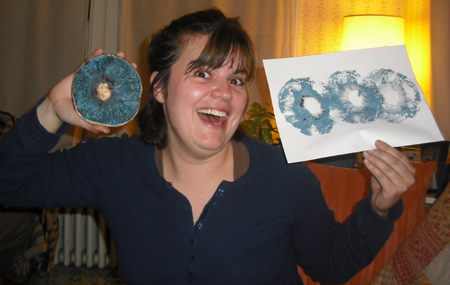 My Pepere* was nice enough last fall to give me a 25 pound bag of fresh Maine potatoes. And boy, did they make some spectacular oven fries those cold winter nights!

As a single woman living by herself living a lower-carb life, it has taken me almost this entire time to get through the whole bag. I have two potatoes left but they are beginning to sprout. And if it is one thing I know, when life hits you with sprouting potatos, you make potato stamps.

And while flipping through Martha Stewart magazine at the Inn yesterday, I noticed a similar stamping situation with portobella mushrooms. (I know, that’s some tough part-time job I’ve got!)

So pull out your vegetables kiddos, tonight it’s time for some healthy fun!

Materials
Potato, mushroom, a vegetable with an interesting texture that you are not planning to eat
Paint
Sharp knife
An object to stamp, like paper (you can also do canvas if you like)
A small paintbrush (if you don’t want to get your hands dirty)
Cookie cutters (optional)

Estimated cost of craft: $10-20, depending on the paint you buy if you have to buy anything to stamp

Cocktail of the day: Bourbon and cola (leftovers from Kentucky Derby night, because bourbon doesn’t exactly drink itself, folks! The online forums recommended mixing bourbon with cola or mixing equal parts bourbon and gin. Clearly, option one was cheaper.)

Some people were on dates and some were working so it was just Sam and I holding down the fort tonight. 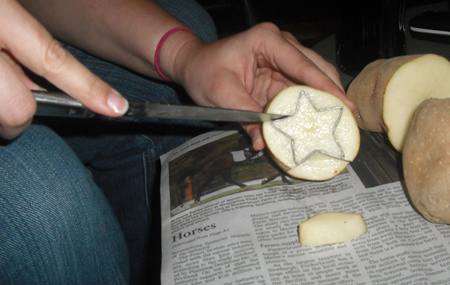 1. Realize that you forgot to go to the craft store when last you were in the big city and buy a couple of those little paint samples at the hardware store at $4 a pop. D’oh!

2. Head to Craft Central after picking up one portabella cap and some store brand diet cola at the grocery store.

3. Gather supplies. Be amazed at the fact Dorrie has two containers of cookie cutters. Speculate about her date, thinking that to miss TCT, this guy must be pretty fantastic. Finally begin crafting.

5. Cover potato surface with paint, and stamp the paper. Put lots of paint on the portabella to get the best resulting stamp. That Martha Stewart made it look easy in the magazine but not quite so straightforward, my crafty friends!

6. Drink bourbon-cokes and laugh at mushroom stamps and unsuccessful attempts at them. Finally get it right and take a proud photo.

7. Look forward to sending pretty correspondence on your new paper!