Every Tuesday night, it’s friends, a craft, and a cocktail. Nothing like accomplishing something small while hanging out with friends. (Let’s face it—everyone is busy on the weekend but Tuesday…people could stand for a bit of weeknight fun!) Feel free to suggest crafts to us, start your own Too Cute Tuesday chapter, or otherwise participate either on this blog (all the archived entries are at www.toocutetuesday.com) or on Facebook at www.facebook.com/toocutetuesday.

Awhile back, my friend Kate/enthusiastic supporter of Too Cute Tuesday sent me the cutest little cupcake recipe involving chocolate, beer, whiskey, and Baileys. For two weeks now, we’ve been meaning to make these cupcakes. 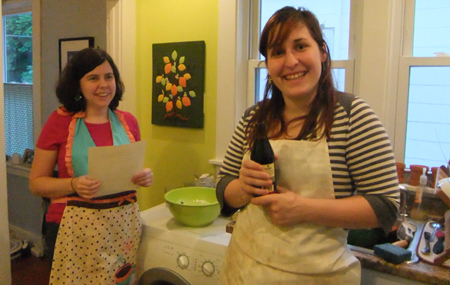 Christie and Sarah get ready to follow directions. Isn’t it good to be back, Sarah?

It worked out perfectly that we decided to make them when Sarah was visiting. (You may remember Sarah, who moved to St. Louis about a year ago and started a Too Cute Tuesday chapter there.) Sarah arrived in Maine just in time to get unpacked and craft with the group. 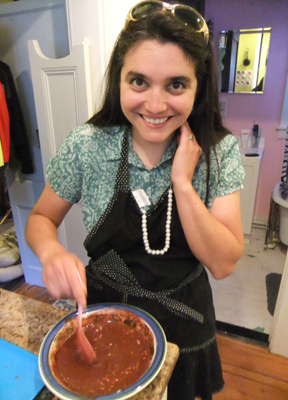 Special equipment you may need to borrow from a friend: cupcake tin, cupcake liners 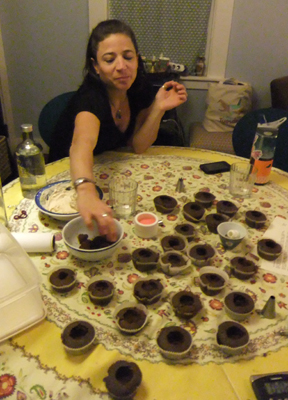 Dorrie takes out the cupcake centers and we slowly eat them. Much better than donut holes.

Basically we followed the recipe from Smitten Kitchen which was perfect. Click here to see it for yourself!

Christie and Sarah did the cupcake mix while Sue and I had time to do the two smaller parts of the project: the ganache and the frosting. (By the way, we used all optional alcohol.) Dorrie showed up in time to take the centers out of the cupcakes (we used the little pointy things you can pipe frosting with, worked well) and frost the cupcakes.

Note: Stick the ganache in the freezer when it’s done and stir every ten minutes until thick. Meanwhile we had only put it in the fridge so it didn’t cool quickly enough. We ended up pouring a little too early because it was past 9 at night and, being a school night, crafters had to head home.

27 cupcakes later, we got to eat the cupcake centers and enjoy every surface being covered with chocolate and frosting. Messy but totally worth it, and great to be crafting with Sarah again!

Yummy dessert and visiting friends… aren’t we crafting and having fun at the same time!