I love psychology and contemplating what makes people tick. So, when I saw this article that examines why we like, comment, or share things on social media, I had to do some reading (because this is the sort of thing that makes me tick). The article made some interesting suggestions (it’s an attempt at self-expression, it feels like we reap some benefit out of it, etc), but what stuck out to me was reason #3: “To express virtual empathy.” Before reading this article, I understood the concept of “virtual empathy” but didn’t realize people had named it. The article goes on to discuss that, in terms of the types of interactions we can have with others on Facebook (and elsewhere), “liking” is alright, but commenting is better, or “more satisfying,” for both parties. And then it gets into why we share things in the first place (to alleviate loneliness) and why we choose not to share things (self-censorship). It was, overall, a very interesting read. But back to virtual empathy.

What are some common ways people experience virtual empathy? Let’s take a look:

Thumbs Up. The simplest form of expressing virtual empathy is through a “like” (coincidentally, it also carries the least amount of empathy-weight). Studies show that people like being “liked”

across the boards: no matter the social network or demographic. That probably seems like a no-brainer, but who doesn’t enjoy a “truth universally acknowledged”? A “like “can be a way of expressing approval, solidarity, understanding, compassion…the list goes on.

In my opinion, virtual empathy in the form of a “like” doesn’t carry a lot of weight (in the article mentioned at the beginning of this post, a “Like” is described as “a quick and easy nod”). Being overly cynical, a “like” is just a click into the void. If I write a heartfelt status update about a deceased relative, for instance, am I really going to feel a person’s compassion and understanding because they clicked a button? Probably not.

Commenting/Sharing. A comment or share ranks higher on the virtual empathy scale, because they require a deeper amount of thought and action. Since they’ve consciously taken time and effort to comment on something, a comment is given more weight. In the example of a deceased loved one, a quick “Sorry for your loss” comment goes a bit further than a “like.” When we measure the success of posts in terms of marketing, this holds true: posts that are commented on or shared are considered more successful than those that have been “liked” (even by the algorithms that measure analytics).

Sharing is usually done out of support- maybe an event or announcement that could use a larger audience (like a fundraiser or lost dog post). In other words, sharing is caring!

Virtual Reality & Telepresence. When you Google “virtual empathy,” the results include a string of articles on virtual reality.  At first I was slightly peeved that Google misunderstood my request, but it appears that the two are interwoven in a tremendously interesting way. One of the results was the story of an elderly, disabled woman who was unable to leave her bed but wanted to be outside towards the end of her life. Her daughter used modern technology to give her the experience of being outdoors without putting her health at risk. There’s also Henry Evans, who, though quadriplegic and unable to leave his bed, is utilizing something called “tele-presence” so that he can still interact with the world. In fact, he has given several TED Talks on the idea of “tele-presence”:

Virtual reality has also been used to help people understand conflict in far away places. Students at the University of Southern California created a virtual reality experience (I hesitate to call it a “game”) called Project Syria (read more about that here). I have to admit, the intricacies of virtual reality escape me because I’ve never used Google glass or even played video games (unless you count Mario Kart/Super Smash Bros), but the idea intrigues me. If something feels real enough that it provokes a deep emotional response- like empathy- well, that seems like a pretty powerful tool.

In the same vein, tele-presence carries some weight in the world of social media, with new apps and networks that allow us to experience the world through the eyes of another. Snapchat has recently started playing up this idea in it’s Live Stories Feature. In this section of Snapchat, you can view what’s going on in the world (I just took a screenshot of what’s in there today- it changes on a daily basis). Last week, the featured story was West Bank and a look on either side of the barrier. The running of the bulls was also featured. 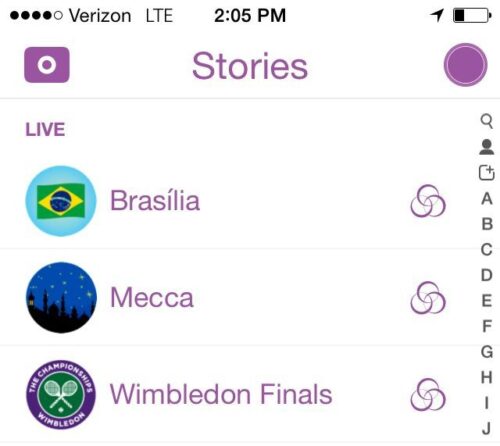 A few months ago, I explored the idea of increased awareness through social media in this blog post about hashtags. Facebook, Twitter, Instagram, and the newer live-streaming apps like Meerkat and Periscope provide us with the unique opportunity of exposure to other areas of the world without ever having visited. We can learn about events from a source other than huge news channels. We can see what regular people are saying or experiencing, without ever having met them or spoken with them before. It’s not the same as a real life connection, but I think it has a more powerful effect than we realize.

Maybe you’re on Periscope live streaming a video of a kid riding a bike for the first time, as narrated by a parent, and suddenly you remember your first time riding a bike, or what sharing that experience with your kids was like. Maybe you don’t have any recollection at all, and you just reflect on how excited that kids must feel. Regardless, you’re bound to feel something, to care at least a little bit. Maybe you hit like, comment, or just move on- but you probably just experienced a little slice of virtual empathy.