#imkindofabigdeal: The Social Impact of a Hashtag

I have a confession. It’s actually not that big of a deal in the grand scheme of things, but here it goes: I’m careless when it comes to hashtag use (in my personal life, anyway). To be honest, I only use them when I’m in a goofy mood. Late one night last week, instead of sleeping I was scrolling through the internet, and came across an article regarding #givebenajob. It was the story of Ben, a young man with Downs Syndrome, who is looking for a job in the catering business but is having difficulty acquiring due to his mental disability. His stepmother created this hashtag in order help Ben with his search and, ultimately, get him a job (you can read the article here). This got me thinking about the different ways people use hashtags to connect with the world (besides my “this is totally hilarious in my head” method). Here are three general categories I came up with: 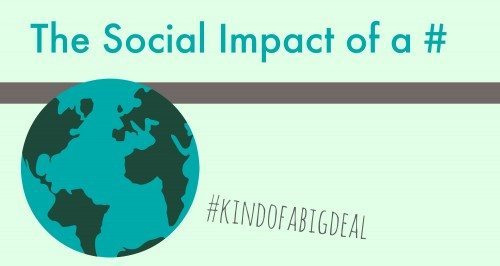 1) Promotion. My first awareness of using hashtags at an event came from my first ever WordCamp last fall, where I learned that you can search Twitter for a hashtag and it collects all those hashtags together for you. And yes, that is hashtag 101. Anyway, hashtags are common at conferences and gatherings (not just for computer nerd-esque conferences, either) because they allow attendees to communicate with one another and create an organic conversation that organizers don’t need to facilitate (think hands-off promotion).

Hashtags carry weight on a much larger scale. Think back to the ALS ice bucket challenge this summer. There were videos with hashtags going up all over the internet to promote the cause and raise money. In August, $168,000 had been raised. Even celebrities, politicians, and athletes joined in. Another popular example of a hashtag to promote an event is #givingtuesday. Giving Tuesday is a yearly event that occurs on the Tuesday following Thanksgiving (this year, on December 1st). By using the hashtag, you’re letting people know that you’re participating and sharing how you, your family and/or business are giving back.

2) Solidarity. When tragedy shakes our world, hashtags become a way for people to band together across the globe. For instance, this past January after the attack on the offices of Charlie Hebdo in Paris, people showed their support through the hashtag #JeSuisCharlie. In a 24 hour period, approximately 3.4 million tweets had gone out using this hashtag. It became one of the most popular hashtags in the history of all Twitter. The hashtag was being used by people all over the world as an effort to reach out and stand together in a virtual sense. There’s a theory (to be further discussed in the next bullet point) that this particular use of hashtag creates a sense of camaraderie and connectedness that wasn’t accessible to us before.

We can also show solidarity to certain causes, like #GiveBenAJob or #WearYellowForSeth (a 5 year old boy without an immune system has asked the internet to wear his favorite color, yellow, simply because it makes him happy, on March 27…which is today!). These issues are smaller scale in terms of the number of people affected, but they have the potential to turn someone’s day/life around, if you decide to participate.

3) Awareness. Social media as a whole has given us the ability to receive and process information from all over the world to our fingertips with ease. If nothing else, the use of hashtags grants us a new level of awareness about what’s going on, be it in the next town over or Hollywood or Tibet. In spite of the increased opportunity for connection, there is the argument that these connections are not real or significant. And, in the case of tragedy and horrific events, what does using a hashtag actually accomplish?

There’s a word for this sort of activism: “Slacktivism” (or, as this PBS article more graciously calls it, “hashtag activism”). This word draws on the example of issues such as Kony or #Bringbackourgirls, where it seems unclear what purpose the hashtag serves. In the earlier examples, the purpose is clear: raise money for ALS, expand the job search for Ben, wear yellow for Seth- all clear, all attainable. But, can using a hashtag for “Bring Back Our Girls” really save a group of schoolgirls kidnapped in a different country? Which leads to the ultimate question- does social media actually bring about significant change, or is it more like “a public relations stunt that accomplished next to nothing” (quote from this article, in reference to the 2012 Kony campaign).

Unfortunately, I don’t see a clear answer- just a ton of gray area. On the one hand, social media has helped create a “global village” and allowed for us to connect with other people in the world, making us more likely to empathize, care, and feel responsible for the well being of people we’ve never come in contact with. However, in spite of this awareness, our knowledge is still limited. We can only know what we’re told, after all. For instance, we have the basics for “Bring Back Our Girls,” but what about all the other things that are going on that are “horrifying and unhashtagable?” At the moment, all I can think is “hastags make me aware of how little I’m aware,” and it’s a vicious cycle, so for now, I’ll stay put in the vast expanse of gray area.

Hashtags carry quite a bit of weight. They have helped raise money and awareness. They’ve brought a smile to someone’s face.

No, a hashtag isn’t going to stop a warlord or arms dealers. It isn’t going to end war or hunger, cure cancer, or make sure everyone on the planet has consistent access to clean water. That is the work of people. A hashtag can, however, start a  conversation.