Things We’ve Written About That Are No Longer ‘Things’

The other day I saw this tweet and thought “Huh, I did actually forget about the whole clown thing from last year”:

In that vein, I got to thinking about some of the other things that I’ve forgotten about over the past few years. We stay on top of the trends, new apps and websites we think are cool or could become be a big deal, but that doesn’t always mean those things have staying power. Thanks to @imchip’s tweet, I dug through some of our older blog posts to take a look at some of the apps that have been left behind: 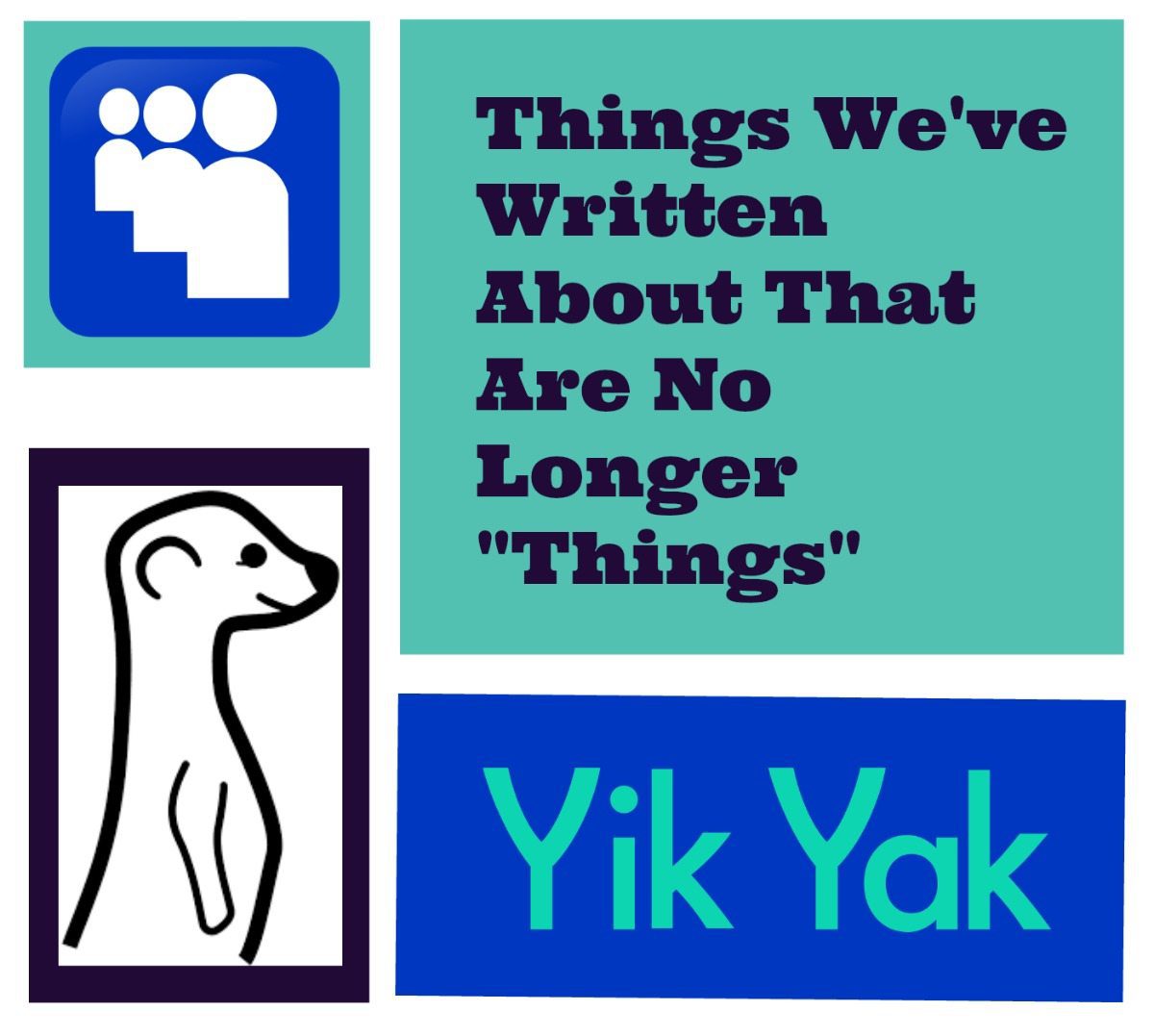 Yik-Yak. This was a blog post I’d written almost 3 years ago now, and I’d completely forgotten about how FUN this app was. An anonymous social network that allowed you to post an update and up-/down-vote others within a certain location, it was pretty hilarious. The app wasn’t really popular in rural Maine so I only ever saw maybe 4 yaks that summer when I wasn’t traveling. However, Yik-Yak was also an example of social media turning ugly after some Yakkers used the platform for cyberbulling and making bomb threats. A couple months ago, the company announced that they would be no more. Although I admittedly haven’t paid attention to the app in a long time, I’m still a bit sad to see it go.

Meerkat. In 2015 live video was a budding enterprise and we saw the launch of Meerkat and Periscope. But as they say, “There can be only one.” Periscope has since been acquired by Twitter and lives on. Meerkat, on the other hand, was declared dead last fall. Meerkat’s parent company, Live On Air, said they learned from the experience and have developed the Houseparty group video chat app. In the meantime, live video is now widely available through Periscope, Facebook, and Instagram.

Pokémon Go. Pokémon Go was launched around the time of the Great Clown Scare of 2016. It was an overnight sensation. But a few months later, Pokémon Go dropped almost totally out of my newsfeeds, social media news stories and blog posts. But is Pokémon Go dead? Not by a long shot. Squirtles, Zubats, Psyducks and their ilk may make a splash again this summer as the company plans a big update. Meanwhile, Pokémon Go remains popular with certain folks but is no longer considered a “viral among the masses” app.

Peeple. Back in the fall of 2015, John brought Peeple to our attention.  Advertised as “Yelp for People,” there was a lot of backlash at the concept, pre-launch. As a result, post-launch Peeple was declared “boring” because the creators actually took people’s feedback into consideration and ended up with a watered down version of the app. While Peeple is still in existence, it hasn’t quite lived up to the hype.

Prisma. Like Peeple, Prisma is still an active app, but I think it’s become more of a niche thing than a “used among the masses” thing. Something else that I found interesting: Other apps like Microsoft Pix are starting to replicate the artistic photo effects of Prisma, meaning there’s more competition in the market. Again, I don’t necessarily think Prisma is dead or dying, it just seems to have plateaued.

And finally, something that used to be a thing but is no more — MySpace. Back in 2007, I was on MySpace for a hot second before getting freaked out by the whole thing and deleting it (only to have my friends convince me to get Facebook the next year). MySpace had a good run and has exchanged hands a couple times over the past couple decades (technically it does still exist). Perhaps the coolest thing I’ve seen in the post-MySpace news is that Tom, the dude everyone had to be friends with, was able to retire very early and spends his days traveling around the world taking photos (source).