Ride the Yak: Why YikYak is Possibly My New Favorite App

I’m generally accustomed to being the “in-the-know” person in my circle of peeps (unless we’re talking Twitter or Seinfeld references), but during our recent Boston trip, our friend Matt totally won the “Have you heard about ______?” game. Matt introduced Nicole and I to a little app called Yik Yak. It is AWESOME, and kind of addictive. It follows SnapChat’s model of “leave no trace,” which people seem to find more and more appealing lately.

In hindsight, my brother definitely already tried explaining Yik Yak to me while he was at Bowdoin (college students are the target demographic, and the app is most popular on the East Coast), but, I clearly was only half-listening.

How does Yik Yak work? Yik Yak is more or less the social media love-child of Twitter and Whisper. You can post an update of up to 200 characters, and its completely anonymous. You can’t upload any pictures, so its an all-text app. It also uses your location, so you can only see yaks (“yaks” are to Yik-Yak what tweets are to Twitter) that’ve been sent out within a 5 mile radius. If you’re in a city, there’s a LOT of material coming in throughout the day. If you’re in a more rural area, it’s unfortunately less exciting. Especially when no one else has YikYak. 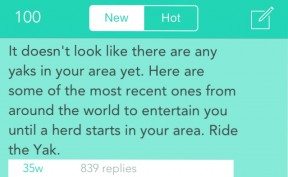 This is what YikYak looks like from my parents’ home in Milbridge.

As one might imagine, coming back from an introduction to this app in Boston and then traveling back to Trenton/Bar Harbor/Milbridge, Maine was a bit disappointing. We’ve probably seen the same 3 Yaks over the course of the month (most of them from visiting people complaining that no one here uses Yik Yak). I’m crossing my fingers and hoping that this changes in the next month or so, because it’s a great source of mindless amusement. 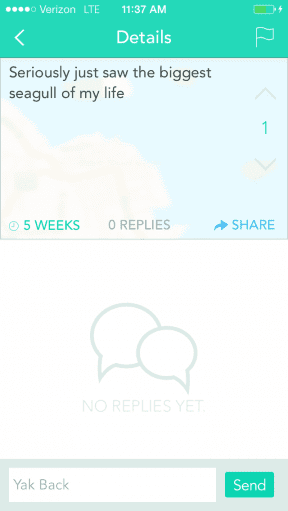 To interact with others on YikYak, you can upvote, downvote and/or reply to something they’ve written (which also happens anonymously). A neat self-monitoring tool of YikYak is that if a post gets a certain amount of downvotes, it will disappear entirely (so if someone posts something especially inflammatory, other people can downvote it to make it go away). And, as you might imagine, people tend to hide behind the safety of anonymity to say/do some negative things.

The intended age for Yik Yak use is 17 and older, but as you can imagine, that doesn’t keep out the younger kids. These kiddos (and the college students, I’d guess) are using it for cyberbullying purposes, and apparently bomb threats. Despite being an anonymous post, there are ways to trace it back to a certain phone when the content is a clear threat to others.

Instead of knocking the app itself, or using our energy to forbid kids to use social media, doesn’t it make more sense to educate them about respecting each other? Just because you CAN be mean to someone (with no consequences) doesn’t mean you should. And there’s really no age limit on that philosophy. 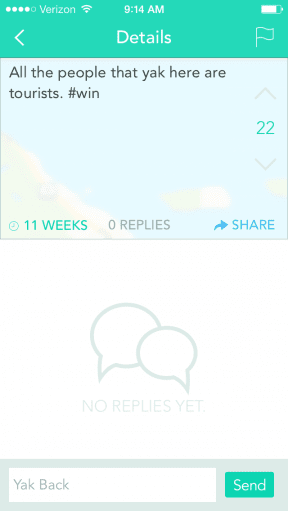