Things are not always as they seem online (we talked about this a couple years ago around April Fool’s Day).

Of course, we now have access to sites like Snopes that sort through the various stories circulating online (like whether or not Stepbrothers 2 is really in production-the important stuff).

This year, we’re exploring a deeper level of internet-related illusions- one so secret, we weren’t really supposed to know that it exists. You know those viral videos where some thing seemingly serendipitous happens, say…a rat taking a selfie, and it happens to get caught on camera. What are the odds that a rat just so happens to run up to a sleeping man, and just so happens to take a picture of itself? Some would argue…the whole thing was staged. Yet, we had evidence, so why not believe it? This is how myths begin.

The word “myth” has a few different definitions. First, it can be “a widely held but false belief or idea” (from Google), “a story without an author that is passed along and is usually intended to teach a lesson, or something that is untrue” (from YourDictionary), and finally, “A traditional story, especially one concerning the early history of a people or explaining some natural or social phenomenon, and typically involving supernatural beings or events” (from Oxford Dictionary).

With these definitions in mind, it makes sense that social media has become the vehicle for delivering myths in the past few years. If you haven’t already seen the aforementioned rat taking a selfie video, check it out here. Even in the following article, there is some skepticism about the supposed serendipity of it all. Later on, in a podcast from Reply All and this Reddit post, it was revealed that there might be more to the story: the video allegedly involved the sleeping man in subway, possibly the man videotaping, and a trained rat. The whole thing was actually orchestrated by a “Neopagan illusionist” who goes by the name Zardulu (you can find her on Twitter and Facebook). 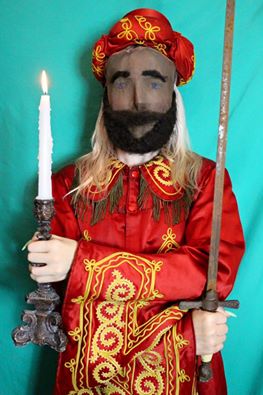 Zardulu isn’t like the other conspiracy theories/pranks that we’ve discussed online, namely because she does not want to take any credit for them. According to her, one of the paid actors leaked the selfie rat story. Jimmy Kimmel proved to us a couple years ago that staged videos could be eagerly consumed at face value- the difference is, he ultimately wanted us to know it was fake.

Zardulu, on the other hand, is just in it for the myths. In terms of her real identity, we aren’t sure who she really is, and she wants to keep it that way. Her intrigue, to me at least, lies in her motivations- why she’s doing what she’s doing, and how she goes about doing it. Zardulu’s Twitter handle is @iamthemythmaker. You’d think that for someone who claims they don’t want any notoriety for their work, why have social media accounts at all? Here is my counter-argument: Zardulu shares nothing about her work on social media. Her status updates are generalized, like this Facebook status: 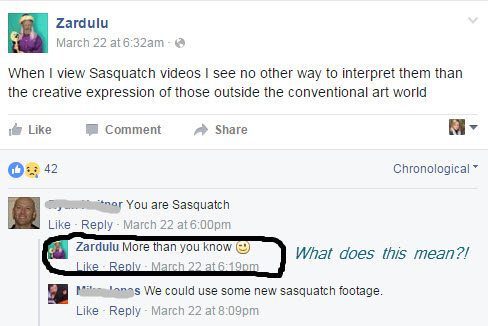 She doesn’t admit to being part of anything specific. It makes it really hard to prove/disprove that she’s done…well, anything. The Reddit post mentioned earlier concludes with the following questions: “How many of these rat escapades are being staged by Zardulu? What other high strangeness in the NYC area can be attributed to Zardulu?” Honestly, this question kind of sent me into a spin.

Sure, we know about Zardulu now- but she’s probably not the only one doing this sort of thing, right? And this is only one example of her work that we know about. Nothing is real anymore. Then there’s this horrifying concept (from the DailyDot article): “Zardulu argues that we’re essentially already living in the Matrix, but it’s a matrix constructed out of digital images and narratives.”

It turns out, the internet (with the help of social media) is actually the perfect breeding ground for creating and perpetuating myths. Zardulu herself writes “With the advent of the internet and viral nature of social media, myth creation no longer requires great lengths of time. For the first time in history, myths can be created in mere moments” (from Founding and Manifesto of Zardulism– interestingly, in the form of a Google Doc- more on why she may have done that here).

Think about the rat selfie video- such a story gains a lot of traction over social media (likes, shares, retweets, comments, etc.)- the perfect way to generate a myth. Social media allows for a story to reach far and wide, as long as it’s given enough of a spark.

What I wonder about Zardulu (or any myth perpetuating personality online), are they doing it for fun or as a larger commentary on society?

In light of this recent knowledge, I’ve been questioning everything that goes by online now. Everything. I still want to believe, but there’s been a wide net of suspicion cast over all online happenings now. The nature of Zardulu’s work is such that there’s no way to definitively prove whether or not she was behind any of it. Which then makes me wonder, “What if she’s lying about the selfie rat?” And so it goes. Does this story make you question what you’ve seen online lately?