Money for Nothing and Apps for (Almost) Free

The ability to send someone money online has been around for a few years now, but there are still interesting innovations being made on a regular basis. There’s crowdfunding apps that we’ve discussed before (GoFundMe and Kickstarter, for example), but even these are becoming niche-y and hyperfocused. Even though it’s easier to spend money online these days, there are also ways of saving and even making money. And, if you owe someone, it’s so easy to transfer at the touch of a button. My brother and I often join forces for parental gifts (we figure one awesome gift is better than two sub-par gifts- macaroni art is apparently sad when you’re in your twenties). The apps in this post go beyond the usual money apps that we tend to think of, like Mint or whatever our personal banking system uses, and if my brother and I had our act together, we wouldn’t have to exchange money like this: 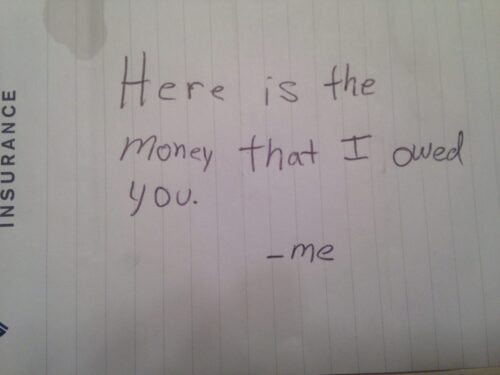 Tilt. This crowdfunding app is popular among college groups, and I can see why. Tilt is an app for group fundraising towards a goal, like a spring break trip, for instance. To get started, you set a bare minimum amount. If at the end of the fundraising period you haven’t reached the minimum amount, no one will get charged. There are three ways to raise money on Tilt: collect, fundraise, or sell something (yes, that’s what it’s referred to on their site). As a person unfamiliar with Tilt, I didn’t quite grasp the difference between fundraising and collecting. “Collecting” means pooling resources for your personal gain (i.e. that spring break trip I mentioned earlier), while “Fundraising” is dedicated to a particular non-profit. Afterwards, anything you raise will go directly to that non-profit (it seems like an attempt to eliminate any potential shadiness).

Tendr. This is a prime example of a really specialized app. I discovered Tendr accidentally while looking for a different app (which I’m not even truly sure exists at this point and I’m starting to question my sanity a bit…if/when I ever find it, I’ll explain). Tendr is a wedding registry app, but instead of seeing what items the couple wants, you just give them money. It’s crowdfunding for brides and grooms! Sure, you could probably start a wedding registry via crowdfunding on Indiegogo, but people might think that a) you’re weird or b) it’s not legit. With something as niche-y as Tendr, at least it’s clear what the end goal is. Personally, I’d much rather give a bride and groom money via Tendr than Indiegogo. I’m curious what other niche fundraising apps will start appearing- wedding registrations are one of many common transactions that can be made more convenient.

Smarty Pig. This program is similar to your average piggy bank, but smarter. It’s like setting up a savings plan through your usual bank, but for a specific goal (parameters are at least $50 – $250,000), but you can also make additional one-time contributions. Your family or friends can also contribute via the “Find Users” link. If you want, you can even make your fundraising efforts public and link to your Facebook and Twitter accounts (a recommendation- if you are going to make your money raising attempt public, try to make it compelling and give people enough information- we made a whole Tech Thursday about this). One great thing about Smarty Pig is that it doesn’t let you cut corners. Even those who are hopelessly undisciplined with finances (me…) can’t thwart Smarty Pig. I hate it when apps outsmart me…unless it’s for my own good.

Acorns. If you have some spare change at the end of the month, and are interested in investing, Acorns is the app for you. This app is designed to make investment suggestions based on your age, location, and available resources. How is this different from having someone else manage your account? You don’t have to pay commission or account management fees (read: it’s awesome if you are kind of broke). It’s free to try and for accounts under $5,000, it’s a dollar a month, and there’s no fee for withdrawing your money when you’re ready. To fuel your Acorn account, you can pay via lump sum (one time payments), recurring daily, weekly or monthly payments. You can also use “round-ups,” which is what caught my eye. When you set up an Acorns account, you can link it to whatever online payment accounts you have (checking, credit card, PayPal) and Acorns will look at the dollar amounts of each transaction and round up to the nearest dollar. The change will go towards your Acorns account. Honestly, if I could just have a round-ups feature on my savings account, I’d be one happy (and potentially rich) camper (this round-up ability might exist somewhere, but as I mentioned before, I’m not great with financial stuff).

These apps are just a small sampling of ways we can raise, save, and exchange money on the internet lately. What are some cool money-related apps that you’ve seen go by recently?