Here’s the thing about selfies:  you may absolutely love them, or denounce them and everything they stand for, but chances are you’ve taken one. Or have at least thought about taking one. According to this infographic, about a million people take a selfie every day. 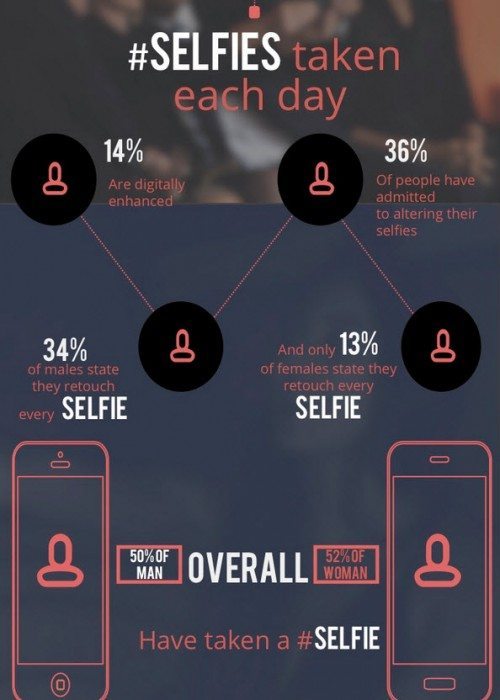 Sometimes, hearing the word “selfie” is enough to produce some heavy eye rolling, yet it’s also comical to see selfie fails go by and vaguely wonder what is happening to society. On the other hand, I feel like there’s more and more stories about people going to extreme lengths for “The Ultimate Selfie,” which in turn makes me wonder if things have perhaps gone a bit too far. 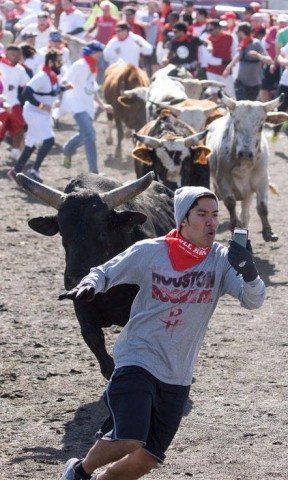 You have so many other things to be worried about right now, man.

From what I’ve observed, it seems that people generally have two issues with selfies. The first is that they can be obnoxious in a social setting. Going out to dinner, a movie, the gym, or wherever- you may encounter people taking selfies. To me, selfies in public are kind of like seeing someone pick his nose. I’d probably prefer he didn’t, but it’s not really interrupting my life so it doesn’t bother me that much (and, hey, I might want to keep the option open for myself, so why judge?). However, if he came over and wiped his nose on me, I’d freak out a little. Unless a person’s selfie is directly interfering with another person’s life, I guess I don’t see the problem.

The second grievance is that some consider the selfie a ploy for attention, as if all selfies should be captioned: “Please look at me and give me validation. Pleeeease” To a certain extent, this is probably true. There are some interesting studies circulating these days about what goes on in our brains when we post selfies on social media. Many of these studies claim taking “too many” (interestingly, there is no actual number for the “right” amount of selfies one should take) is a sign of underlying mental disorder- namely narcissism and addiction. Then, there’s the mental process that happens after a selfie has been taken, potentially retouched, and uploaded into the world for approval. People can apparently get a bit neurotic post-posting, becoming fixated on the number of “likes,” comments, and positive/negative attention their picture receives. This kind of behavior is concerning, and the studies argue that this process of attention-seeking will set people off into this compulsive-behavior spiral of selfie taking and no one will ever find true happiness. More or less.

Some also claim that selfies are a way of “branding” ourselves as individuals, which I find pretty intriguing. It makes sense: the process is about constructing an image and presenting it to the world as “You.” Branding is about telling a story, and, when it really boils down to it, so is taking a selfie. In other words, selfies = self-definition. The problem starts when self-definition shifts from the picture itself to the amount of attention it gets from others. 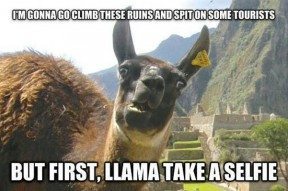 This llama’s selfie habit is clearly getting in the way of it’s day-to-day life.

Selfies aren’t all bad, though. This article brings up an interesting argument for selfies, and how they can help parents teach their kids positive lessons about self-image. Being childless, I never thought about this. The article discusses negative image issues that many women deal with post-children, and, as a result, they don’t want to appear in pictures with their children. It turns out, the advent of selfies changed all of that. Now, women are appearing in photos with their children, which will ideally impart something positive about self-worth to their kiddos: “I

want them to learn that we, as their parents, see ourselves as good enough to star alongside them in the photographic records of their lives.” It’s a good point- we’re all setting examples, whether we realize it or not, so why not make it a positive example?

Ultimately, people are going to keep taking selfies, and there will be ongoing speculation about mental stability and what filter someone’s using. Whatever your stance on selfie taking, just remember: no duckface. 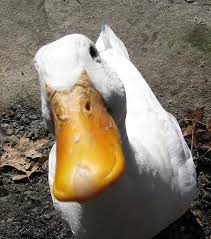 Unless you are literally a duck.