One of my colleagues is Jim LeClair, who runs the Maine Coast Welcome Center. He’s a mapping specialist who gets businesses listed in GPS units, etc.

I got a call from him last week, asking if I’d mind looking at his Facebook stats. 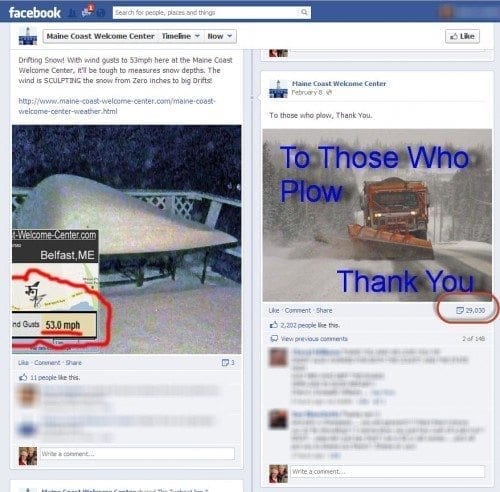 A simple thank you got around 30,000 shares (the photo was reposted and got 1,000 more shares from that). Even Jim, the guy who made it, is shocked.

Jim thought it might be fun to post a picture thanking the plow people. He didn’t use Photoshop or do anything fancy; it literally took him five minutes. What happened next shocked him.

Over 100,000 people were ‘talking about’ his photo on Facebook and in 48 hours it got thousands and thousands of shares.

“How do I capitalize on this?” he asked.

“Did people like your page from it?” I asked.

He said about 400 people liked his page from the photo.

Sadly that’s the only way to follow up with people is if they like your page. Could Jim take out a Facebook ad with this picture and probably eek out a few more fans? I’m sure but those 30,000 fans will not hang on his every word from now on. And that’s ok.

A few takeaways from this situation:

1) Being positive will get you way farther than being negative.
This photo generated some discussion, including some back and forth about plow drivers being overpaid. At first Jim was going to delete the negative but then he decided to just let the discussion be discussion. But his positive sentiment thanking plow drivers got him way more traction then being whiny.

2) You can’t plan viral.
Would Jim have made this photo different if he know hundreds of thousands would see it? Probably. But does it matter? This idea that you can plan for something to ‘go viral’ is ridiculous. Things online have a life of their own and you have to embrace that.

3) Some fame will linger in the way of fans who stick around… but a lot won’t.
This is why when things happen, you enjoy the exposure. Some new fans will stick around but not a majority (400 out of 30,000 in this case). And that’s ok.

Jim is enjoying the paparazzi not being outside his door (kidding), it was a pretty cool experience I’m happy one of my friends has had.

Have your own ‘going viral’ stories? How did it change your business? What did you learn?