Our previous posts about online advertising have covered pay per click and display ads. As discussed in those posts, PPC and display ads are different options in terms of types of ads (PPC means you pay when someone clicks your ad and hopefully makes a purchase, display ads offer general awareness and cost per 1000 or so impressions). This week is about ad networks, which offer a convenient method of getting your ad to a publisher. In other words, it’s less about display and more about the transaction between publisher and advertiser.

What is an ad network? An ad network is a solution to supply-demand in the world of online advertising. Ad Networks act as matchmakers that fill in the gaps for those trying to sell ads and those looking to display ads. So, you sell custom llama hats, and this llama farm is looking for advertisements, you have a 83% compatibility match! (Note: this is not literally how ad networks operate, and probably not how matchmaking works, either).

Ad networks, much like matchmakers, come in all shapes and sizes. For instance, some ad networks work specifically within certain niches (i.e. technology, home improvement, outdoor apparel, that sort of thing). Other, much larger networks are more concerned with “blanket coverage” (or, the leave no stone unturned model). There are also, as you may imagine, different options in terms of pricing and the amount of say you have about where your ad goes. Three common types of ad networks include:

Vertical/Representative: With this type of ad network, you’re allowed full control over what website(s) your ad goes on. You also might even be able to choose the position of your ad on any given website (while this sounds exhausting, it could make all the difference in avoiding unfortunate ad placements).
Blind: This is a riskier model, but they’re usually pretty cheap. As the name suggests, you have NO idea where your ad is going. This type of ad network would work for the light of budget, but not the faint of heart.
Targeted: This type of ad network uses data from a person’s browsing history and makes assumptions (age, sex, location, interests) in order to determine which ads to serve. (This article has more information on targeted ad networks and how they work).

As with anything, there are some pros and cons to explore. Perhaps the best thing about ad networks is that you don’t have to hustle your ad. It eliminates the whole door to door “Hey, can I put my ad in your window?” element to online advertising, which saves a lot of time and energy (and is great for those who hate doing this sort of sales thing in the first place). Working with an ad network may also get you in touch with businesses you wouldn’t have had access to otherwise (i.e. you’re an actor and the ad network is your agent who helps get your foot in the door with big production companies). You also don’t have to haggle over pricing with a publisher, the ad network does all of that for you.

The biggest con to using an ad network is probably the gamble. While you’re likely to save money by sending your ads to a network, you could also end up paying quite a bit. Another potential issue to watch out for is where your ads are actually going. Like I said before, some networks will let you control where your ad gets displayed, other networks won’t. If you like to have control over that sort of thing, then maybe ad networks aren’t the way to go.

YouTube Partners: If you’re a YouTube sensation, like Dom Mazzetti or Justin Bieber, you can enable your channel for monetization. This means that your video will display relevant ads “either inside or near the video” who will pay you to display on your video(s). Of course, there are some strict rules about what videos are eligible for monetization (the good news is, if you’ve filmed your cat and there is no background music, you  could be in line to make some money). The amount you can make by becoming a YouTube partner depends on the ads that get displayed (which you don’t have any control over, but hey- money!). 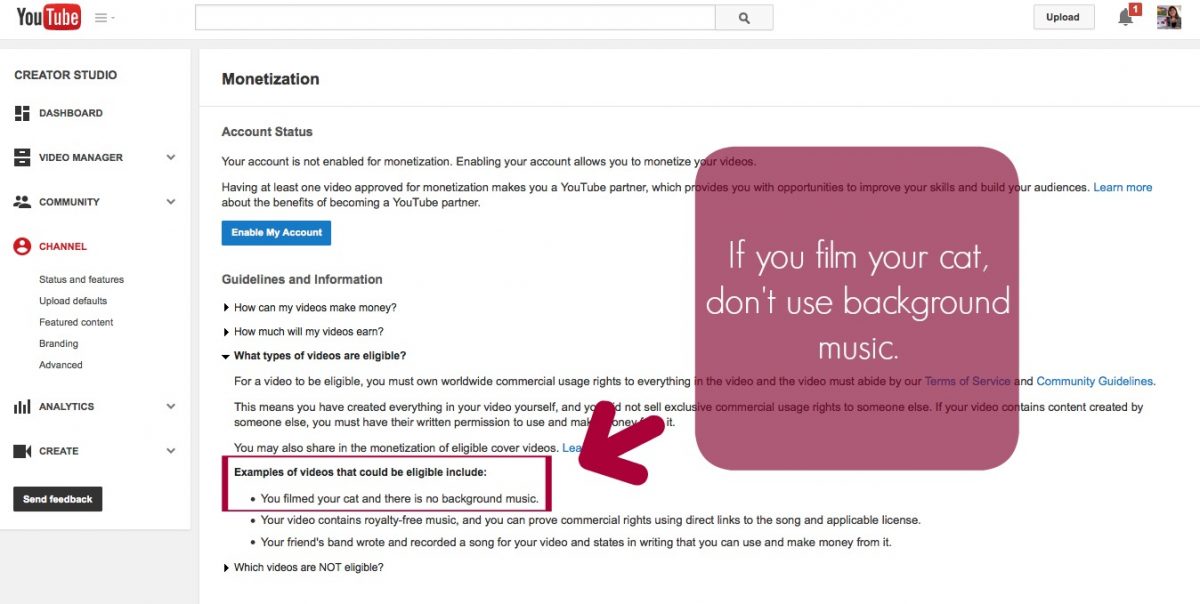 BlogHer: Another real life example of ad networks in action is BlogHer. As the name suggests, this is primarily geared toward women bloggers, but it isn’t a “no boys allowed” situation. How does it work? Well, BlogHer has a vast network of writers (called Influencers) and certain marketers are encouraged to join in and have their products/services/brand talked about (or maybe just featured in some sort of ad. In the description of their services, BlogHer says: “Our Influencers share your brand with their readers- in the context of their lives.” So, someone might approach BlogHer with a new celebrity product launch or a custom video recipe series, and say “Make this popular” (but more eloquent and professional). BlogHer then connects the product or service with different writers in their network, and away they go.

There are hundreds of other ad networks out there, of all sizes, service and variety. Stay tuned next week for a post on Affiliate Ads!