Every Monday I profile a person or business doing something cool to promote themselves online. Think there is someone I should consider? Contact me and let me know!

Breaking Even began as a personal finance blog back in 2007. Since then, it’s become about business and other things on occasion but a money theme, even if barely noticeable at times, runs throughout. (It’s no coincidence, for example, that TCT crafts mostly cost under $10 to make.) When asked what my blog is about, I say “Money. Well, kind of.”

That said, I still follow a lot of personal finance and money bloggers and when Phil Villarreal sent me an email a few months ago about reviewing his how-to-save-money book and I accepted, because I like books, especially when they are free and go with the theme of my blog.

I noticed a few weeks after our communication that reviews of his book were all over the blogosphere. Then, his book became a New York Times bestseller. 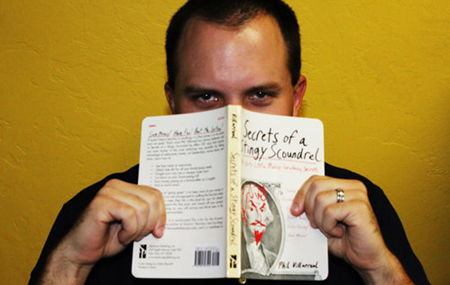 He sent his book to anyone who’d review it.
I noticed a few of my favorite bloggers had read the book so I asked Phil how many people he had review it.

“I contacted about 130 bloggers and journalists (about reviewing the book) and got positive responses from 100. I’ve probably gotten about 60 reviews so far and am working on getting yeses or nos from those who got books but haven’t yet reviewed them.”

Also, he’s always looking for more people willing to review it, so contact me if you want to read this book and review it on your blog.

He followed up about reviews.
I am a classic example of why people need to follow up. I am often happy to do something for someone else but I am also a little forgetful. Phil emailed me a few times to see if I was still planning on reviewing the book.

According to him, “Follow-ups are key because almost all my reviews came after I asked whether they’d gotten the books and intended to write anything. I bet I wouldn’t have gotten half of my reviews had I not followed up.”

He was specific about what he wanted.
After I sent him the link to the review, he asked me to crosspost it on Amazon.com. I would have personally never thought of that but I’m happy to do it. One more example of why it never hurts to ask for what you want!

He created a Facebook page for additional buzz.
I hadn’t noticed there was a ‘consumer products’ category for FB business pages. Makes sense!

On his Facebook page, Phil links to the coverage the book has gotten in addition to letting people know what’s going on with the book. And since bloggers like links to their sites (good for SEO) and people love spending loads of time on Facebook (good for making people feel popular), it’s a win-win.

He didn’t just link to good reviews.
People buying things, online or otherwise, appreciate transparency. Mighty Bargain Hunter had a negative review about the book on his blog and, like all the other reviews, the Facebook page linked to it.

He believes in his product.
Phil, like many successful people, has really internalized his belief in what he’s doing.

“What keeps me going is that all but 3 people have written very positively about the book, which makes me believe it’s worth putting all the effort into promoting it. I’m going to continue searching for more coverage until the publisher tells me the book is no longer in stores.” Yay tenacity!

He has a publicist.
Now I was wondering how a guy who works for The Arizona Daily Star, Consumerist.com, and OK Magazine had the time to promote his book (let alone write it initially). The answer: he has a publicist that he works with.

At some point, it may be worth paying someone to coordinate your efforts on a book launch, event planning, etc…especially if you have a full time day job.

So if you have a book, it’s certainly worth promoting it online. ‘Secrets of a Stingy Scoundrel’ proves that even with a small publisher, you can have a successful with hard work, smart planning, and good relationships with bloggers.

Oh, and here’s a link if you want to buy the book!