Every Monday, I talk about people doing clever marketing. If you know a company that’s doing something neato, contact me and let me know!

It would be easy for any print magazine to get a little flustered in this economy. Journalists are being laid off at a higher rate a than other professions and I think we have all seen our favorite newspapers and magazines change over the last year or so. 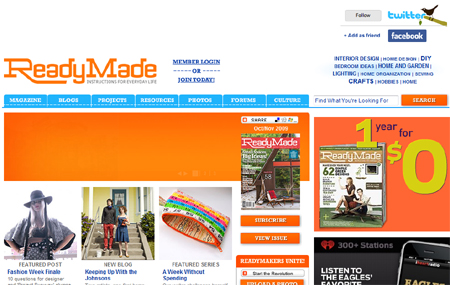 One magazine that seems to be doing well is Readymade. I first learned about the publication via my first conversation with who would become my friend Jessica. We were in the company breakroom where we both worked and since she was the new girl, I struck up a conversation. While she didn’t quite have me at hello, she did have me at a creating a chandelier out of string lights for her parents’ anniversary present. As a snappy dresser and fellow crafter, clearly we are going to be friends for a very long time.

Here are a few reasons Readymade seems to be thriving while other magazines seem to be floundering:

They’re niche-y but their stats look good.
It probably isn’t fair to compare a magazine like ReadyMade to a crafting supersite like Martha Stewart or a magazine supersite like Better Homes and Gardens but the data looks pretty good for RM. While traffic is way lower than more well known sites, overall traffic over the course of the year is up 260%. Holy improvement, Batman. It’ll be interesting to see how things pan out a year from now but my bets are that ReadyMade will continue to do well.

Their Facebook page is crazy popular, probably because all the links they share are really good.
So ReadyMade has over 3,000 fans (BHG has 700ish, though it’s fair to say that Facebook is more of RM’s target audience). That’s impressive. More impressive seems to be how much people interact with the page. And that doesn’t even count the people like me who pop on and look at photos of people who made a dumpster out of a pool.

Their website content feeds their magazine content, and vice versa.
I’ve seen content in their magazine refer to things that can only be found on the website and vice versa. I see more magazines doing this, but it seems to often be on one page in the magazine (ie here is all of our online stuff). ReadyMade’s approach is much more integrated and therefor feels a lot more natural for readers on and offline. To me, it’s like the website people and magazine people actually communicate with each other. 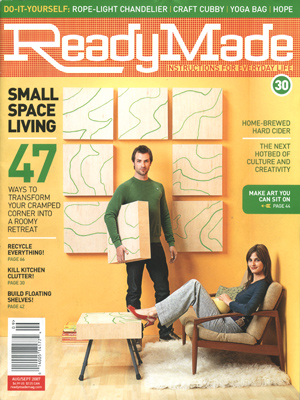 They don’t give it all away, contentwise.
The newspaper I used to look at saw the writing on the wall and changed it up, and ReadyMade has done the same. It costs money to create content so why shouldn’t people pay for some of it? A lot of ReadyMade crafts are on the website but just enough are missing to make me want to have my subscription.

Speaking of which, they are running a two years for the price of one subscription special on their site. This also makes me feel good as a subscriber, like at least they are commiting to be around for the next two years!

There are plenty of ways for users to contribute to the site and interact with one another.
Yes, people can do this via social media but that is no excuse for not having outlets of self expression on the company website. When I found out I could upload my own craft photos or talk with people on the forums, I thought that was kind of cool. Letting users create content: it’s free to them and keeps their website fresh. Those ReadyMade website folks are pretty smart!

(Note: My one beef with the site, since I hate forums, I wish I could subscribe via RSS to all the postings in a certain section of the forum. I can subscribe to an individual thread but not to where people start new topics.)

The ReadyMade brand is a consistent fun one that is being built by their print and online publications. Proof that giving some away and making people pay can work if done right.