A few weeks ago, I did something completely uncharacteristic: I went to NYC by myself, booked myself a hotel room, and went to a women’s retreat.

“The Experience” is a yearly event held by Mama Gena and her staff. Event attendance is free, you just have to get yourself there and house/feed yourself for the duration of your NYC trip.

Once you sign up, you get redirected to a website with a lot of information about the event. There is also a link to a Google spreadsheet where people to the event can communicate travel plans, potentially looking for carpool partners and/or accommodation sharing options. 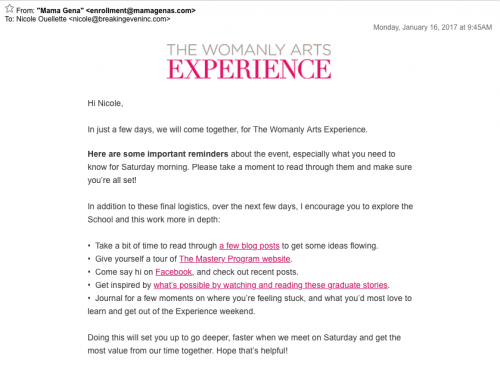 All communications prepped registrants for information about ‘Mastery’ during the program. I took it as the equivalent of having to listen to the timeshare talk for an hour when you use someone’s timeshare: a sales pitch you just have to resist if it’s not for you.

I prepared myself for a sales pitch accordingly.

Through the Google Spreadsheet, I met a fellow conference attendee that I became friends with. (How many people can say they made a friend through a Google spreadsheet?) Aside: She later told me she saw my name and looked me up on social media to ‘make sure you weren’t insane’, which I appreciated. Since I didn’t ask her for permission to use her name, let’s call her Joan.

On the walk to the convention center, we met another woman who gushed like a religious convert about her cult’s leader. “I come every year, four years now” she said. She had flown in from Washington state for the occasion.

Walking in, there were women with bright pink feathers dancing and waving around as dance music blasted through the speakers. Joan leaned over, “This reminds me of yoga retreats.”

“This is the opposite of software conferences.” I said.

Turns out there were 2,000 people at the event and the room was packed. Most people were wearing what I consider ‘normal clothes’ but others had leather bodysuits, over the top dresses, and other costume-y outfits.

“First time?” someone asked me. Yup.

Mama Gena had just written a new book and I was surprised to see exactly zero copies on sale. I thought of throwing a free event for 2,000 people: renting the hall, organizing the participants, creating the agenda/program, and the fact she could have made $10ish/book times 2,000 people and yet chose not to.

I won’t get too nitty gritty about the events of the weekend, but will say overall it was fun, informational, and emotional. I kept waiting for the books to appear but they didn’t. Day two is when the discussion of ‘Mastery’ began. Joining Mastery costs around $4000 and doesn’t include the monthly travel to NYC (for I believe four weekends).

That’s when it dawned on me why there were no books for sale at “The Experience.” What I realized is people on the fence about joining Mastery would have just talked themselves into buying the book (a much lower financial risk) to try it out. Giving up $10 to make $4000 means you can have 400 less customers to make the same amount of money. Plus Mama Gena saved herself having to schlep around a bunch of books and instead she’s able to drive online sales and measure her success that way.

The talk about Mastery was less sales pitch and more like a religious conversion. Women testified to their experiences: love, money, success, and other positive life changes coming to their life after Mastery. And the final conversation of the weekend was Mama Gena working with a crowd member who was on the fence about Mastery and the crowd almost convincing her to join. Mama Gena never said a word about it; she let her ‘fans’ talk to this woman about how the experience could change her. This woman was worried about the money Mastery cost, which I thought was a legitimate concern. It was the only part during which I was a little uncomfortable. The line between self empowerment and personal conversion is a fine one and I’m honestly not sure how I feel about it.

We were asked not to take pictures at the event to respect each woman’s privacy so I didn’t. This not needing to document the experience was surprisingly freeing. I also found myself connecting with the women sitting next to me instead of going to my phone for feedback from my real life friends. (The WiFi was also surprisingly terrible, which I’m wondering if they made happen on purpose.)

Because this was a free event, none of us expected food/refreshment but the team was good about circulating available nearby lunch options and pointing out water bottle stations and the Starbucks inside the convention center. It turns out information can be a way to accommodate people.

I would recommend Mama Gena’s Experience to women who are at a point in their life when they want a change (or a change just happened) and/or who are missing the sisterhood in their lives. The women I met at this conference were incredible and impressive and just meeting them was worth the effort. Mama Gena is also a gifted presenter/storyteller/entertainer who comes off as very genuine and caring but also keeps things moving forward. Just make sure you know how you feel about potentially joining Mastery before you go.