Every Monday, I feature some cool marketing, be it something that a person, business, or organization is doing. Please tip me off if you have an idea of what the BE Blog could feature! 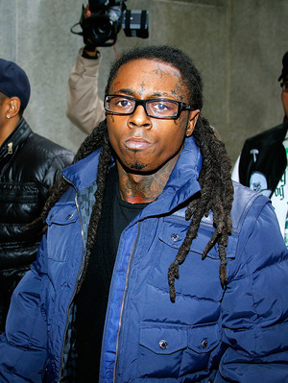 Except for listening to the rap/hip hop on occasion (usually while driving or on a treadmill), I hadn’t thought much about Lil Wayne until last week. The rapper was busted for having a concealed weapon, and while they had initially talked about him possibly going to jail for multiple years, it looks like he’s going there for a least one.

But this guy is no slacker. Here’s what Lil Wayne is doing right, post having done something wrong:

He recorded nine music videos in two days. According to a commenter on the NPR story, Elvis did the same thing before going into the Army.

He has twenty songs pre-recorded and ready to go. Yup, that’s an album’s worth. Sure, if some get leaked, he might have to think of more (the hype alone might be worth leaking a few on purpose) but all this groundwork is part of the plan. According to NPR:

“He has a label, Young Money Entertainment, that’s going to keep him front and center while he’s in jail. They are moving from their headquarters in New Orleans to New York, to be close to him while he’s at Rikers Island…His label has made every effort to make it seem like he isn’t gone while he’s actually gone. When he gets out, he may be bigger than he was when he left.”

What a concept! And in this age of the internet, video conferencing, email, etc., there is no reason that someone can’t go to jail and continue moving their career, at least partially, forward.

He participated in the ‘We Are The World’ remix for Haiti relief. If you’re going to jail, might as well do something good before getting locked up. Haiti is not only a good cause to be associated with but a chance to be associated with other artists, which Lil Wayne has been good about doing anyway. To that same effect, he performed at the Grammys with Eminem and Drake.

Essentially, Lil Wayne’s been doing anything but keeping a low profile. That said, he hasn’t spent the last free days partying but instead working to build a foundation for his continued career. While I don’t agree with the crime, I think I can at least respect that the guy has a work ethic, and has leveraged this press attention (and going to jail) the best way he could.