Is your business or non-profit promoting itself in a cool new way? Contact me; I’d love to write about it! 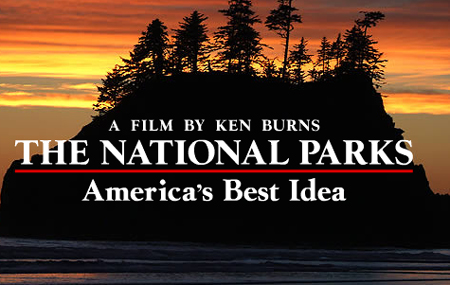 I’ll know I’ve hit the big time when I am written about in the New York Times or the Huffington Post…or both! (Until then, I bask in my small-though-significant-to-me internet fame.) It’s probably a bit easier, however, for a national broadcasting agency to get this national press coverage.

Here’s the coverage of this documentary series ‘The National Parks: America’s Best Idea’:

In the MDIslander, our local paper, for the screening being held at the Criterion Theater.
On the Acadia National Park blog (which I follow since I am a supporter).
In Conte Naste’s Traveler magazine from last month.

And that’s just what I’ve noticed. I am pretty sure that Florentine Films, the company that produced it, isn’t handling the publicity if only based on the fact I had to dig around the PBS website to even get their name. (Also their website is pretty bare bones, probably because they are busy making award-winning documentaries).

Baring us all getting our own media saavy promotional teams, there are definitely some things to be learned from PBS’ effort that we all can use:

PBS uses great photographs.
One tip I remember reading at some point (though it could also be from my friend John) was to include a photo with any press release. Especially these days when newspapers and other publications are less likely to have a full time photographer, your press release suddenly becomes much more interesting to run if it has a nice photograph with it. (And I can say this with some authority since I used to work for a newspaper and sit in on news meetings where some of these decisions were made.)

Your photo certainly doesn’t have to be an award winning one, but at least set yourself up to succeed. For example, when I take photos for my clients, I make sure me and my $125 point and shoot digital camera show up either earlier in the morning or later in the afternoon (so at least lighting is on my side). I also take photos in a variety of camera settings so when I get home and start processing, I have some choices.

You can also get someone to do the photos for you. It may be worth the investment to hire a professional photographer to get lots of shots that you’ll use in the future. Just remember, you get what you pay for, well, most of the time anyway.

In this case, PBS is also using historical photographs.
People love history and looking at old pictures. Some of the most hesitant users of the internet that I know will only go online to 1) check email and 2) research genealogy. So if there is history behind something you are doing and you can dig up an interesting photo, that is a whole other audience to appeal to.

Plus it can show your idea/business/whatever has been around for awhile, something people really appreciate. My family’s hardware store has been around for four generations and I can’t tell you how many positive feelings that seems to give people in the community.

If you aren’t doing a media campaign anytime soon, you can still take advantage of historical items. Scan some old photos of your business, your employees, old bill of sales, etc. and use them on your company blog or website. Historical and artistic, it’s the kind of thing people will share with their friends.

PBS got press coverage at all levels.
A majority of people seem to get their news from a variety of sources. While national is a great market to hit, reaching out to local publications and organizations is far from a waste of time. I’m a pretty connected person but one of my main sources of information on this event was local.

Whatever you do, put some thought into what you are promoting, who would be interested, and why when you send out a media release. For example, this video is targeted at outdoor enthusiasts, history buffs, and Americans in general. So targeting efforts at environmental publications, active historical societies, and local papers located near the profiled national parks are great places to start in addition to, say, CNN. Because coverage is coverage and in this great place called the internet, a seemingly small time website can suddenly get hundreds or thousands of hits in one day!

So bravo to PBS not only for funding the production of a great series but for knowing how to promote it!

To see clips from the series or otherwise learn more about it, see the National Parks Service or PBS websites.