It’s been a big year for looking back. At least, it certainly feels that way, with “Back to the Future” Day this past October and the new Star Wars movie coming out in a few weeks. Some classic Nick at Nite shows are airing again, Mad Max and Vacation came back the theaters, and even fringe was back in for a little bit. It’s like the Ghost of Christmas Past visited last year and decided to stay put. Appealing to nostalgia has always been a technique in marketing, for reasons that can be summarized in the following quote from Dwight Shrute (The Office): “People underestimate the power of nostalgia. Nostalgia is truly one of the greatest human weaknesses..second only to the neck.” 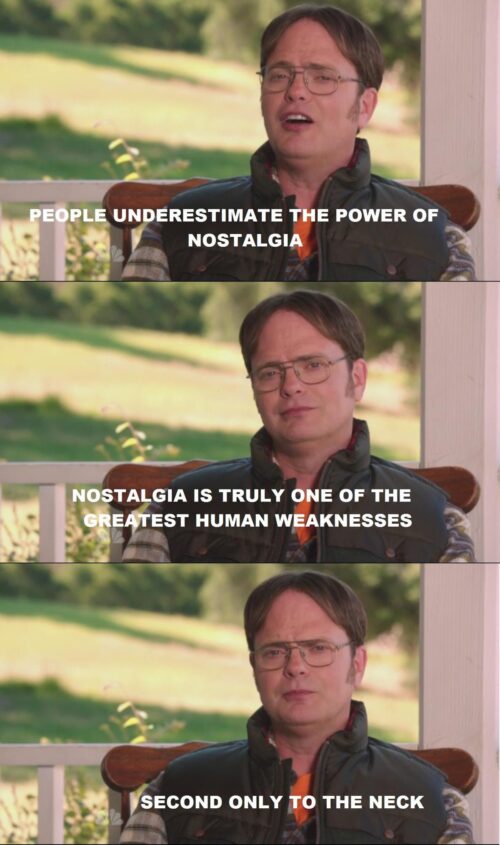 You’ve noticed Facebook’s “On This Day” messages by now, and have probably seen and/or dabbled with #tbt (Throwback Thursday, or maybe even Flashback Friday or Transformation Tuesday). Social media has been jumping on the sentimental bandwagon this year. Facebook’s is especially intriguing- it’s kind of a gamble, right? Some memories take us back to good times, like a group photo of your college friends on vacation together or crammed in a dorm room for a Tuesday night viewing of  She’s the Man, jerryrigged with a storage tower, several textbooks, and a 2007 Macbook (oddly specific because this just came up in my own newsfeed). There’s also the gamble that a person will revisit an unpleasant memory, like an ex-significant other. It’s like Scrooge being forced to look back at his past and relive the pain of losing his lady (a scene that’s even more painful in A Muppet’s Christmas Carol because there’s a whole breakup song that Scrooge has to re-listen to). According to this article from Hubspot, the risk of serving a painful memory is worth it, since nostalgia can produce some pretty powerful positive feelings in people. It can band together a generation, encourage people to reach out to one another, and yes, buy things.

Some brands are tapping into this “blast from the past” by reintroducing old products or campaigns- it’s like re-purposing memories! According to recent articles on the subject, the ’90s are in right now. This article from Entrepreneur has a hypothesis that there’s a 20 year sweet spot- in other words, 20 years is an appropriate time to consider “retro” enough to market again. Another consistent piece of advice I’ve seen for brands considering the idea of re-introducing an old product is to take a look at what your customers are saying- especially on social media. There might be a clear demand for a certain product they’d like to see brought back, as Crispy M&Ms and Burger King’s Chicken Fries discovered. Coca Cola revamped (note: not “re-used”) their “Share a Coke” ad from way back when and added names to their labels. From a business standpoint, nostalgia marketing is an efficient approach- it saves time not reinventing the wheel, and it’s brings back something that has already been successful. The key is to not overdo it…like Rocky.

The assumption that people view the past through a rose colored lens, and perhaps the best time to Holidays and nostalgia go together like peanut butter and jelly, which you’ve seen from Coca Cola’s Christmas ads with the polar bears (1997’s edition below) to anything with a family setting. We all feel drawn to the idea of “home,” so these ads and marketing campaigns tug at our unsuspecting heartstrings. Verizon is now incorporating the old Rudolph movie into it’s holiday commercials, and I’m personally hoping for one where Yukon Cornelius and the Abominable Snowman come in to buy a family plan. They should probably get unlimited data.

Although nostalgia allegedly “increases feelings of social connectedness” and can create “positive feelings about the future,” I’m personally not looking forward to the things that will resurface 5 years from now…can we just remember the ’90s forever?