Earlier this spring, Instagram decided that it’s users really needed the ability to hashtag their emojis, meaning you can now search for any emoji and see what others have posted (if they use the hashtag, of course). This wasn’t a life-changing moment for me- if anything, I thought it was unnecessary but mildly entertaining…and promptly forgot about it. In my life and work, I have a lackadaisical approach to the emoji and no strong feelings toward them. It turns out, other people don’t necessarily share my lukewarm attitude. Some are convinced that emojis are a plague brought down on language by younger generations, while others believe they enhance our communication, pushing us toward language 2.0. After observing such heated opposition (with my feet still planted firmly in the middle ground), I dug a little deeper into the world of emojis.

The very first thing I learned: there’s actually an emoji dictionary. This is a crowdsourced effort from the World Translation Foundation (yes, WTF). Similar to Wikipedia, the Emoji Dictionary allows others to jump in and contribute where they will. I got sucked into the myriad of definitions and example uses of the current emojis (below is one example, used purely because the Example Use was hysterical to me). 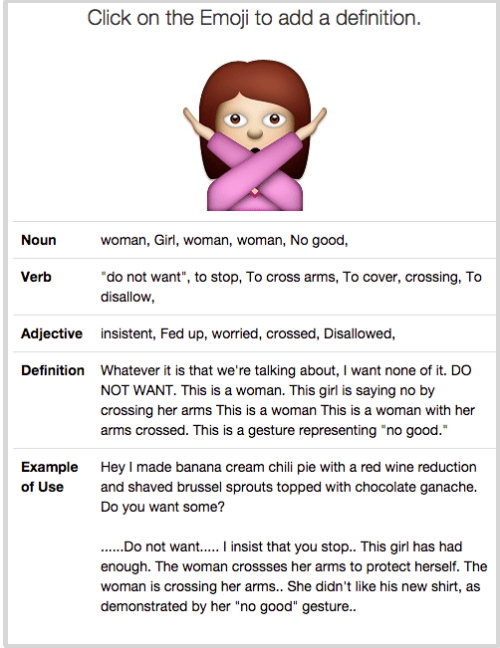 After perusing the dictionary for a tad too long, I had the harrowing realization that I’ve been using emojis based on my own interpretation. What if I’d accidentally been misusing an emoji in a really embarrassing way? Sure, in the grand scheme of the world, emoji misunderstanding isn’t the worst case scenario. In fact, it’s actually pretty common according to this article. Like many others, I assumed the two hands together emoji was more of a prayer, but it’s intended use is to be a high five. As mentioned in the article, the world of emoji hashtags is really one of the only places where you might find a Lamborghini side by side with a prayer for Nepal.

I think it’s fascinating that something as simple as an emoji can be interpreted differently among different people across the world. We all have unique perspectives and experiences, so why would our emoji uses translate similarly?

Speaking of emojis getting lost in translation, another delightful discovery I made was the Emojili app, where you can chat with people using only emojis. Last August, two friends the app as a joke, but it’s shutting down at the end of the month due to lack of funding. I read this hilarious article about one girl’s misadventures with Emojili (so that I could avoid downloading it myself for a couple days pre-shutdown). As if one emoji wasn’t potentially misleading enough, try stringing them together to form a coherent sentence. Last April, a couple decided to spend a month using only emojis to communicate. To be honest, I probably would’ve lasted a week and then broken up with him out of sheer frustration, but I’m happy to report that the couple made it through, and learned a thing or two about what works/doesn’t work in their non-emoji communication style.

So, conversations using too many or only emojis can have semi-disastrous results, but conversations that have one or two may actually help clarify tone according to this article from The Atlantic: “The biggest problem about all electronic communication is that it’s toneless. In the absence of tone, people read negative tone into it.”  In other words, we are a cynical lot and if tone is unclear, we assume the worst. Things get hairy in the professional realm- it’s been observed that the acceptance (or, perhaps more appropriately, “tolerance”) of emojis in the workplace is because of the millennials now entering the workforce (is it just me or does everyone love blaming the millennials lately?). . To me, the “Are emojis work appropriate” question is best answered by a combination of your profession, whether your superiors will frown upon it, and common sense. Sure, emails to your co-workers can probably benefit from the occasional tone-clarifying emoji, but if you’re corresponding with a client, probably not. Again, it all depends. Just because you can doesn’t always mean you should.

This post has really only cracked the surface of what emojis mean, how we use/interpret them, and what their future holds. Academics are studying what emoji use can predict about our personalities, which I’m curious about looking into a bit more. For instance, behavorial studies can even guess what emoji you’re most likely to use based on nationality. Okay, well, maybe just if you’re Canadian...