I’m one of those people who enjoys learning more about my topic when I am off the job. I read social media books and magazines… and have even tried to watch “Helvetica” (a movie about the font).

I just couldn’t do “Helvetica”… it was too cerebral for me. There are enough things in my life that make me feel dumb that I didn’t make myself watch this movie.

When I agreed to watch “Chef” on Saturday night with my friend Megan and her daughter, I thought I was watching a movie about a five star chef who ends up with a food truck. I wasn’t expecting so much of it to be about social networking. Here’s what I liked about it.

In this movie, Twitter plays a main role, some critics say it’s a ridiculously large role but I appreciated that this movie showed how Twitter works and why it’s powerful/cool. Bonus points for seeing the tweets being typed in and then having them turn into a bird an ‘tweet’ off into the world as they were sent. 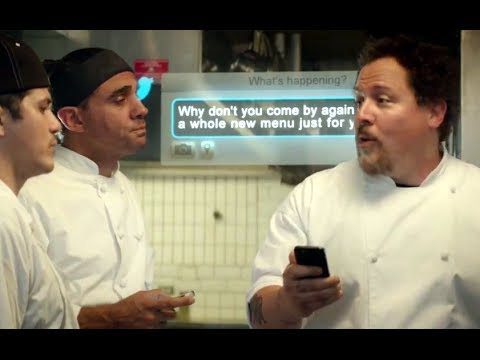 Chef Takeaway 2: It touched on a bunch of social networks.

Sometimes movies about blogging (I’m looking at you ‘Julie and Julia’) make the main character blogger sit at their computer for hours on end, tortured by the writing process.

Here’s the thing. Some of us are writers (I say us because I am literally typing this with a big smile on my face) and some are not. In this movie, we’re not only introduced to short form writing (tweets) but also other media like Youtube and Vine.

The range of what could be possible is enough to give the movie watcher a sense of what is possible but doesn’t go into the ‘how’ enough to overwhelm people.

Chef Takeaway 3: Your kid can do your social networking…kind of.

There’s always some extremely rude person who tells me after a presentation that their kid can do what I do. (Kind of insulting since I don’t walk up to THEM and tell them a kid could do their job but that’s besides the point.)

Here’s the thing about this movie: the kid is PASSIONATE about the business. That’s why he does a good job marketing it. It’s not that he’s young and up with technology (though that helps). I’m of the mindset that if you are open to learning and passionate about what you do, your business will do well on social media with you at the helm… though if you either a) don’t want to take care of it or b) need a little technical or other assistance, that’s what people like us are for.

So if you want to watch a movie that will make you want to tweet or eat a grilled cheese (I am still thinking about the grilled cheese in that movie), I recommend ‘Chef’. You won’t think hard necessarily or feel like you are in a social media marketing workshop but it’ll get you thinking… which, let’s face it, is pretty powerful.