The Before & After Craze

Whenever you get on the internet or social media, eventually as you scroll through various posts, you’ll probably encounter a “before and after” image. I recently saw this article about a woman’s photoshoot before/after her gastric bypass surgery. Her photographer friend came up with a clever concept for the before/after images, where her pre-bypass and post-bypass selves were interacting with one another. Why does social media enjoy before/after images so much? Or, more accurately, why do we like before/after images so much? Perhaps we’re all a tad sentimental, yearning for simpler times. Or maybe we all secretly want to be time travelers, and looking at these pictures is the closest we can get (#tbt, anyone?).  I’m  personally leaning toward the latter explanation, but whatever the reason, we seem to be fixated on stories that depict transformation. This may also help explain our culture’s fascination with werewolves etc.

Weight and body transformations are probably the most common types of before/after images that we see go by (with fitness groups and accountability), but there are so many other types out there. It’s a timeless marketing tool (think of any laundry detergent commercial you’ve ever seen) and inspiration for entertainment (pretty much any fixer-up show on HGTV).

They show change. Whether we consider that change progress or regression, before/after images show development. This change may deliver some shock value or share the results of someone’s effort and hard work. They offer the reminder that nothing is permanent, which can be equal parts reassuring and terrifying.

Time lapses are also a way to show change. I’ve never made one myself, but it is a neat way to show how things have progressed. One of the more touching examples I’ve seen is the one where the guy takes a picture of his pregnant wife every day for 9(ish) months, until she gives birth. And it’s all captured in a little under 3 minutes, which is pretty magical.

There’s also the ever popular sunrise to sunset time-lapses, which take you through a day in a matter of seconds.

They can be entertaining…

Who doesn’t love a good (or bad) celebrity transformation? Or seeing shows like Pimp My Ride or Extreme Home Makeover? There’s a reason these shows are/were successful. You can watch an average Joe’s dilapidated sedan transformed into something sleek you’d see on Fast and Furious with a control panel that Batman would envy, all in a half hour time slot with no less than 5 commercial breaks featuring whatever Real World we’re on now. I invested a lot of time in this show, and I don’t even know anything about cars.

There’s also movies like She’s All That or The Princess Diaries, where the average looking nerdy person is transformed into a beautiful popular person. These transformations are usually a matter of switching from glasses to contacts and a good hair straightening, set to an aggressively peppy pop song. Then there’s the hold-your-breath anticipation before the big reveal that we all buy into, in varying degrees. It’s also fun to see how our favorite celebs have grown up over the years.

I especially enjoy when people try to deny that there has been any sort of transformation (looking at you, Renee Zelleweger). “Seriously, I just woke up and had a different nose and possibly a few less wrinkles.” For instance,  That’s like if I decided to dye my hair black tomorrow and then get angry and defensive when people try to tell me otherwise.

In the case of accountability groups, or people who have had a traumatic experience, before/after is used as a story. “Once upon a time, I was here, but now, I am over here.” It’s a way of sharing a triumph against whatever struggles we are going through, encouraging others. This is how Kayla Itsines became Instagram famous. Her before/after pictures of clients reached a much broader audience than she ever imagined possible.

This is just a snapshot of her more recent posts, to see more check it out here: https://instagram.com/kayla_itsines/

When used this way, before/after images can inspire others through sharing experiences and letting them know that “You, too, can make a change!”

In addition to inspiring positive, healthy transformations, before/after images can serve as a warning. During my senior year of high school, our hallway* was peppered with pictures of healthy looking people turning into promotional material for The Walking Dead. Before/after images are also used to depict really grotesque stuff. Besides PSAs for drug abuse, my other favorite “bad” before/afters include celebrity plastic surgery gone too far and terrible things happening to the environment.

*Some of you might think this is meant to be plural. It is not.

What is it about having that to go back to? We have Transformation Tuesday, Throwback Thursday and Flashback Friday for a reason. There’s a certain “Remember when…” element to these travels through time. During Class Night (the night before graduation) my senior year of high school, everyone submitted a 3 pictures for the slideshow (usually, a baby picture, a candid, and one of the senior portraits). People laughed, people cried. In a way, our slideshow served as a before/after montage of our entire class. It was really heartwarming and we all felt closer than at any other point in our 4 years together.

Ultimately, before and after images are narratives. Everyone has a story to tell, it’s all about how you tell it. 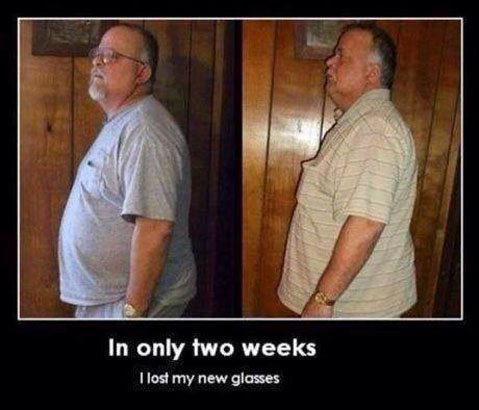 Cracks me up every time.