This past Tuesday marked my first full year at Breaking Even. It seems like ages ago that I wrote my very first blog post (this little gem about Buzzfeed), and it took about three days before I had enough confidence to publish the thing. In addition to the three days it took to write it. In spite of the general anxiety of writing on the internet, hitting “publish” resulted in a huge sense of achievement. Writing about Buzzfeed may not exactly be my calling, but I felt that Breaking Even was my place. Since I am feeling nostalgic, here’s some things I’ve learned in the past year:

1) There’s more than one way to do anything. Fun fact: Once upon a time, I was a science/math person. The rigidity of PEDMAS and the rules of electron sharing was my life. But I didn’t really enjoy it at all, which is why I switched majors after year one of college. Rigidity and black/white thinking don’t really have a place in my current job, either. As an example, we’re toying with some online scheduling programs lately, for ourselves and for clients. At first it seemed that it’d be a “one size fits all” situation, one scheduling program to rule them all. Three weeks later, I’ve acquainted myself with three different scheduling programs for three different people. As it turns out, one size does not fit all. We’re not in the business of cookie-cutter-ing things, so if I have to learn about twenty different scheduling programs, that’s totally fine.

2) Copywriting is my jam. Whether it’s social media updates for clients, writing blog posts for various personas, or email newsletters- I love adapting a different identity and using someone else’s voice. It’s a fun challenge. In a way, it’s a lot like acting. My senior year of high school, I was cheerleader #2 in our school’s performance of High School Musical. I’d never been a cheerleader, but man was it fun to act like one (and have a legitimate reason for Stick to the Status Quo being on my iPod). Although my acting career never amounted to anything, I can still pretend to be a cheerleader or whoever else I need to be on a daily basis. I love the challenge of “getting into character,” figuring out “What words would this person use? How does he/she interact with the world?” Basically, I get to play dress-up, but with words. 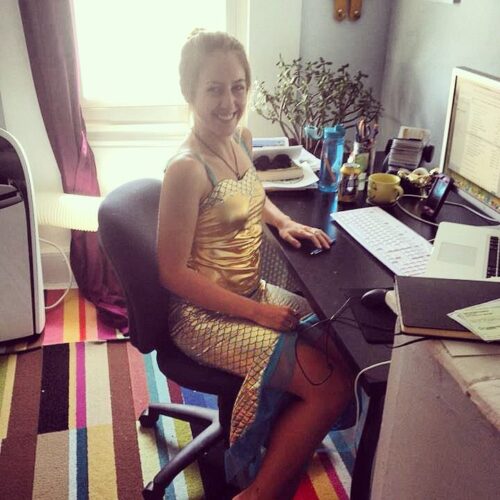 I also get to play real dress up sometimes.

3) The rules are always changing. Google’s rules, especially. Since I’ve started, they’ve already taken away authorship and Help-Outs, probably just to keep everyone on their toes. In addition to Google, there’s a lot of “keeping up” in the world of websites. My introduction to web design was so recent that I only had to know responsive- the old ways of doing things were never in my brain. In many ways, this makes my life a lot easier, but every now and then I see glimpses of those “olden sites,” relics that do not translate well on mobile devices. When these websites were built, no one knew there would be such a thing as a Kindle or Samsung Galaxy. Websites may have to accommodate something in the next few years that hasn’t been invented yet. The only thing we know for certain: nothing is certain.

4) Always have a back up. Of your website, sure, especially if you’re about to make a crazy update. This obviously also applies to life in general. If you have a goal, remember that just because the ladder breaks doesn’t mean game over. You can take a hot air balloon, hop in a cherry picker, create a gigantic human pyramid with your friends with strong cores, or…find a better ladder. There’s more than one way to reach a goal.
Example: This fall, I was trying to make an update to a website. We always make a back up, but for some reason, I couldn’t get our usual back up plugin to work. So, I was pretty sure it was game over, until Nicole pointed out that there are plenty of other back up programs out there. “You know, you don’t have to use this one.” Turns out, the site I was desperately attempting to update wasn’t playing with BackUp Buddy, but as soon as I installed and ran a different plugin, it was fine. My point being, there are multiple ways to do anything. Be prepared to be wrong, but don’t slow your roll. Just change it’s direction.

5) There’s no “I” in “Team.” Nicole and I were recently described as Pen & Teller, which went way over my head, so I came up with my own: Bunsen and Beaker of The Muppets. We aren’t polar opposites, but we each have different strong points (as you may guess by the example duos, talking is the most noticeable point of difference). Throw in John and Leslie, and it’s a party! Being able to interact with likeminded people with different backgrounds and abilities makes the days more interesting. I used to think that I’d do better working solo, but now can’t imagine being without a team.

This is how I like to envision our team (sadly, I think I’m Brick…)

There are tons of other lessons that I’ve learned throughout the year, but I can’t possibly fit them into one blog post. I can barely fit it all into my brain. It’s been a great year, here’s to Round 2!

And, in the wise words of Beeker, “Meep meep.”