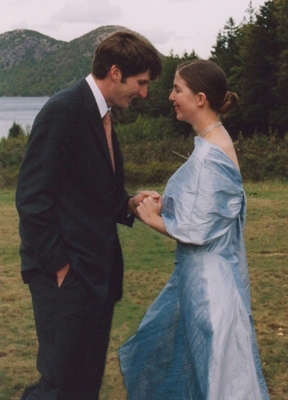 I’ve always wanted to do a series about inexpensive but great weddings and since it’s a busy end of the week, I thought you’d appreciate getting to know a few more cool people. The following three days will feature three couples and how they had the day of their dreams without sticker shock.

Tell us about your wedding day. (How many people were there, what was the ceremony like, overall impressions, etc.) We got married outside on the lawn at the Jordan Pond House, with about 80 people watching. The wedding was officiated by the Deputy Town Clerk using our own twist on a traditional secular ceremony. We chose October with the hopes that we would have good foliage (we were actually a little early for it that year, but it was still pretty). We didn’t have a wedding party, so we picked our witnesses by drawing random numbers (we had numbered everyone’s programs). We purposefully kept the ceremony short and personal. I wore a simple blue silk dress; Michael actually agreed to wear a suit–which we had to buy because he didn’t own one. That was actually the second most expensive part of the wedding.

We held the reception at the historic Hulls Cove Schoolhouse and kept it simply decorated with orange and yellow fabric draped around, in-season foliage, wildflowers, candles and beach rocks scattered about. We had a whole table devoted to the “wedding pies.” People wrote fun notes on the chalkboards on the walls. We didn’t want to get caught up in the trappings of what we are told a wedding should be. Our whole goal for the day was to make the wedding feel like us: down-to-earth, friendly, and good-humored. The whole day felt very personal and fun, which is what we wanted.

What were some ways that you saved money in planning your wedding?
We shamelessly exploited the skills of our families and friends. My mother sewed my dress from material my mother-in-law purchased. My sister has an artistic eye, so she was put in charge of decorating the reception site. Instead of an expensive wedding cake, we corralled friends and family into making pies. We asked a talented fiddle-playing friend to provide our processional music. We asked another friend to take pictures instead of hiring a photographer. We burned a bunch of CDs and put them in a CD changer instead of hiring a DJ or band (we didn’t own an iPod back in those dark ages). We block-printed our own invitations. Basically, if we could do it ourselves, we did. It also helped that we utilized public spaces for our locations. Getting married at Jordan Pond required only a $50 park permit and a promise that we wouldn’t release any non-native species. The Hulls Cove Schoolhouse was only a $150 donation to their cause and a promise to pick up afterwards. An added perk was that both spaces are so beautiful, they didn’t need much sprucing up.

Where did you splurge, and why?
Our number one priority was making sure it was good time for people. We both happen to believe that throwing a good party means good food and good wine, so that’s where we spent our money. We hired our friends who own a local restaurant (Eden) to cater it and they did a fantastic job. Our food and alcohol bill was around $1600, over half our budget and costing about $20/person. But people still talk about the food at our wedding. It was that good. Totally, 100% worth it.

Looking back, was there something you would have done differently?
I would have hired someone to help keep the day moving smoothly. We thought things would just fall into place, and they mostly did with everyone’s help, but it would have been easier to pay someone $100 to be in charge of making sure music worked, champagne got poured, and that things happened when they were supposed to happen. I didn’t account for the fact that I would be too distracted and busy to properly hostess the way I would have liked. I also would have booked a short session with a professional photographer. Our friend did a great job with candids, but having a professional barking at us might have been better for a few formal shots. This is pretty specific, but I also would have ordered less white wine. I was warned by people in the know that no one drinks white wine, especially in October, but I still overestimated. We only had a couple bottles of red wine left, but we had about two to three cases of white. That was money we could have saved. (And we don’t really like white wine, so it took us forever to drink it.)

What advice would you give to couples planning a wedding on a budget?
Don’t be tied to tradition and what the Wedding Industrial Complex tells you must be done at a wedding. You don’t have to have a sit-down lobster dinner for 200 people, a big poufy white dress, and a wedding party of ten people. Think about who you are as a couple, decide where your priorities lie and what’s most important to you, and spend your money there. For us it was food, for others it might be a designer dress or an exclusive location. Then improvise or scale back on the items that are less important to you. People forget that the only thing you need to get married is two people, an officiant, and a lot of love. Everything else is just an add-on.

In addition to having a whole life and being my real life friend, Cherie has her own blog, M and C Build A House.