Godzilla Cake Disaster of ’98, or How to Work With Your Limits

My brother’s 7th birthday party was Godzilla themed. The movie (with Matthew Broderick and Jean Reno) was alright in my opinion, but Stephen thought it was The Greatest Movie of All Time. Of course, this is the same kid that made fun of me for crying at My Dog Skip, so I’m inclined to question his taste in cinema. In order to make this party the greatest Godzilla party ever thrown, Mom decided NOT to consult Hannaford (Shop ‘n’ Save, at the time) for a cake. Instead, she asked a local cake-making woman if she could construct a cake that resembled Godzilla. The Cake Woman seemed a bit hesitant, but agreed to the task at hand.

It turned out awful. 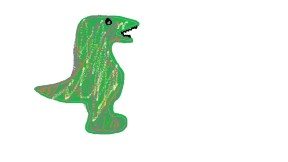 I haven’t located the original picture, but this is an eerily accurate artistic rendition a la MS Paint.

No one wanted to eat the Godzilla cake- including me, the cake-eating aficionado of the family. It was a one-layer cake, vaguely shaped like a t-rex, topped with a green, gray, and brown frosting combination, and a garish face that would give Stephen King nightmares. Mom clearly regretted not going the Hannaford route, and was a little peeved that the Cake Woman thought this offensive cake was appropriate to give to a customer.

I don’t know why, but Godzilla Cake-gate has been on my mind a lot lately (so has cake in general, but that’s neither here nor there). Did The Cake Woman simply agree to a task she knew nothing about, thinking “Eh, how hard could it be?” Was it a personal challenge gone wrong? I refuse to believe that The Cake Woman simply made this particular cake and wiped her hands of it. What happened?  Why did she expose us to this cake horror show?

One of the possible conclusions is that The Cake Woman agreed to do something she wasn’t 100% sure she could do. Honestly, I don’t believe there’s anything wrong with that. I agree to do quite a few things that I’m not absolutely sure I can handle (besides- how certain are we, really, of anything?). Should you be a certain percentage of surety before committing to something, on a work-related level?

“Never challenge yourself” is not at all the moral of this tale. If you never challenge yourself, you never learn. There are thousands of articles and blog posts out there asserting the idea that we must push ourselves in our search for improvement. In fact, that’s something that I really enjoy about this job: I’m learning something new on a daily basis. In fact, we have a set time once a week specifically dedicated to learning something new. The Cake Woman may have seen the Godzilla cake as a learning opportunity.

Giving yourself time to learn and execute a new task is also recommended. “Rome wasn’t build in a day” seems like a tired cliche, but it’s spot on. Maybe you’ve seen the various 30 Day Challenges out there. It’s worth noting that these are a) challenges,  and b) they are issued for a month long span. That’s some time and dedication. If The Cake Woman had put off making the Godzilla cake until the night before the birthday party, she probably didn’t give herself enough time. If she had instead started toying around with the idea a week or so in advance, she could have toyed with the general shape of the cake, the color of the frosting, how it was going to be decorated, and so on.

Here’s another baking experiment example: I was part of a group project for a class at Bates, and our project involved making amazing cupcakes for our entire class (it was senior year). Before the final presentation, where we brought in a few dozen cupcakes, we spent about a month practicing, toying around with recipes, different flavor and frosting combos, and figuring out how long baking actually took. Sure, it may sound like a lot of work for what it was worth, but we were able to deliver a polished finished product to our classmates. And everyone was psyched to eat cupcakes at 8 a.m.

Challenging yourself, whether in your personal or professional life, is something most everyone recommends these days. If your particular challenge involves giving a customer a finished product, give yourself some learning and executing time. Trust me, you don’t want to be in the position of giving a customer a product or service that is the equivalent of Stephen’s Godzilla cake.

That being said, I did totally eat some of that Godzilla cake. Waste not, want not, right?