Do I Need To Know When Someone Opens My Email?

I’ve recently installed an app called Sidekick that tells me when someone has opened an email I sent. (Note: this doesn’t really work with group emails accurately, which you would guess but also would think to be especially handy.) Now I am not into selling Hubspot’s website building software (see blog post about open source about that) but I don’t think they are a terrible company so I am not opposed to trying their other offerings like this one.

It’s been about three days since I’ve installed it. I have the notifications turned on in my browser, which means a little IM-like window pops up and tells me when someone has opened my email. This is both assuring and creepy. 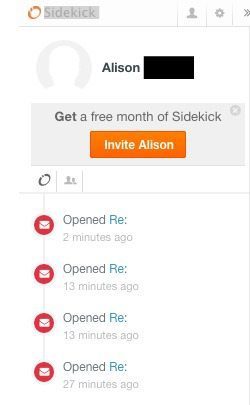 This appears in the sidebar of every email I open. I can see when it was opened as well as how many times.

Like ‘waiting for the boy to call’ all over again.

Now picture knowing that someone has opened your email. And now wait for them to write back.

There is a reason email didn’t come built with this, I am convinced, because honestly the wait can be agonizing.

The feeling of excitement-dread is a lot like when I used to wait for my seventh grade boyfriend Frank to call me. (I have always voted Frank my ‘Most Likely To Succeed’ exboyfriend and you can see him being awesome here.) After middle school, I realized I didn’t like sitting around waiting for phone calls so I just started calling whoever I wanted to call…or would go do something else. Maybe I can learn a similar lesson here.

Gulp, I’d hate someone to know this about me.

Sometimes I think a lot about an email before sending it. Do people need to know how LONG I’m considering my response? Gosh, I hope not. In a higher stakes situation, my hesitation or re-reading an email over and over could cost me a contract or a friendship.

I am of the school ‘don’t knock it until you try it’ but I’m just going to say it: I’d rather not know. And I’d rather it not be known about me either. I think I’ll be kicking out Sidekick real soon… but to those of you who have tried it who aren’t creeped out, please leave a comment below about some benefits you were able to notice in using a technology like this!