“Chunky Yet Funky”: Thoughts on Productivity and My Writing Style

“Chunking” is the idea that when performing recall tasks, like a 40 number sequence, people are better able to remember if they group or “chunk” the sequences together. This is how, to my bank account’s dismay, I unintentionally memorized my credit card number and can now buy things online without having it on hand.

This blog post is not, however, about psychological theories on how humans process information. It is about a different “chunking”- the kind that productivity gurus write about. 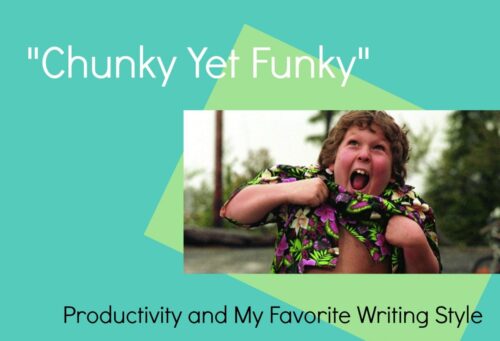 This brand of “chunking” means performing similar tasks in bulk, while your brain is in a certain gear. For example, when we’re working on Breaking Even’s blog, chunking is one of the greatest tools ever. In the morning, I like to get all my writing tasks done- that’s when my brain is at it’s peak. A lot of times this is just stream of consciousness writing (we have pre-determined blog topics set out a month in advance). Later on (in the day, week, etc), my brain will eventually shift into an editing gear. At this point in time, I go back and touch up whatever my brain produced in round one (this involves a lot of word-weeding, or translating things from my language to something more readable). Finding relevant articles is also a “chunking” activity, as is headline generation and image ideas.

Blogging is a pretty simple job to “chunk,” but it translates well into many different areas. As a younger kid, I used chunking while doing chores. When cleaning cars, I’d do all the vacuuming first, then go back and clean the inside with Armor All. It just made more sense to do it this way than to clean one car out, and then the other. It’s similar to building web sites. Rather than building one complete page (writing, add pictures, add forms and plugins), then the next complete page, and so on, chunking just seems to work better. This means writing all (or most) of the content, bulk re-sizing and uploading pictures, creating forms as needed, and so on. That way, things are getting built up together, and you aren’t constantly shifting mental gears (something I personally am terrible at).

No matter who you are, your brain will be in different gears at different points. I read this article last year when I was having issues with writer’s block that offered an interesting explanation. When you are relaxed and generally zen-like, your brain is better suited to creative tasks. On the other hand, if you’re feeling pressured or stressed, that creative flow gets cut off (this is what happened to me). When you get into a mental “fight or flight” zone, your time is better spent researching, outlining, editing, or formatting rather than idea generating or writing.

Chunking can also simply mean dedicating a set amount of time to each task on your to-do list. Once we started using Toggl this January, it became easy to see how much time each task was taking us as we performed it, and it made it easier to go back in the archived time logs and see how long we actually spent on certain tasks. Starting a half hour timer and committing to incremental chunks of distraction free time to each task definitely boosts productivity- especially in this day and age where it’s common to have at least a dozen tabs open at once in your browser.

What areas of your life- work or otherwise- could you be chunking?