Some would argue I’m not that overweight. I don’t have to go to special stores to buy clothes, I can run a mile (most Americans apparently can’t do this), and I do a lot of my own cooking that many would have perceive as healthy. 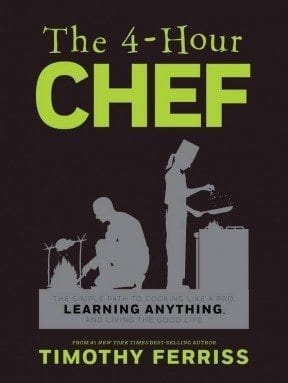 But as a former athlete, having a BMI that is technically obese has bothered me for awhile.

Go to the gym more, people said. Doing this made me hungrier and didn’t budge the scale nearly enough to keep me motivated. I’ve heard before that you lose pounds in the kitchen and ounces at the gym so I figured once I got an eating plan down, I could add the gym back into my routine for toning purposes. But I needed to feel success first… and have some go-to recipes that I could confidently throw together.

Cutting out sugar and carbs didn’t do it. Gluten free didn’t do it. I realized I had to take drastic measures… but needed some guidance.

I plunked down $30 for Four Hour Chef around Christmas. While I thought it was a bit expensive, I realized what I purchased was an encyclopedia. The pages are so dense with information, I don’t know where else he could have added anything. Well worth the price of admission.

It’s been a solid month since really taking on this latest book by productivity expert Tim Ferris. I’ve read his two other books: The Four Hour Workweek and the The Four Hour Body. In the Four Hour Body book, Tim tackled making your body work better. The chapter on weight loss was popular which is probably why he came out with Four Hour Chef, a cookbook that’s not just supposed to teach you how to lose weight but how to cook well.

This plan in summary:

1) No dairy, fruit, grains, alcohol, sugars, or other things that spike your blood sugar.
2) Eat protein, vegetables, and a few exception things sparingly (like avocados, tomato, dark chocolate, and red wine) only.
3) Eat a protein rich breakfast within 30 minutes of waking up.
4) Pick a cheat day and, after your healthy breakfast, eat whatever you want that day of the week.

How has this affected my life? I now take cinnamon in my coffee not creamer. No more quinoa at dinner or clementines in the office, both options I thought were healthy for me. And no popcorn, which is my absolute favorite snack. It hasn’t been easy, but I’m doing it.

This has involved trying new vegetables (for variety’s sake) and learning more about cooking things like eggs in a more flavorful way. This cashew basil pesto, for example, has rocked my world on chicken and also zucchini: http://eatdrinkbetter.com/2011/03/16/vegan-cashew-basil-pesto/

Cheat days have been epic. Derrick, who has been very supportive in my diet, cheats with me hard on cheat day, which usually involves a pack of Oreos, something I would have never allowed myself before. Do the cheat days slow down my weight loss? Probably. But saying goodbye to popcorn and other things I love indefinitely would be unsustainable and possibly cruel. If cheat days mean I lose the weight slower, I am ok with that. The end result will be the same and I’ll have a lot more fun getting there.

So far I’m down eight pounds with 32 to go. 32? Yes, 32. Trust me when I tell you that I know what healthy looks like for me and I’m going there and no where close to anorexic.

If you are the kind of person who’s tried everything and needs something based in science that works, give this plan a shot. There are lots of people doing it (there are forums and everything) and other than the book, it’s free.

I just feel like I’ve been trying to play by the rules of a game and all this time, I’ve had the wrong rule book. And if even one person feels this way that reads this and gives it a shot, it will have been worth writing this.

Buy your own copy of “The 4-Hour Chef” on Amazon (Note: this is an affiliate link)