During my first month at Breaking Even, I was introduced to video editing in iMovie. Okay, “re-introduced” is probably a better word- I’d dabbled in iMovie  back in 2002, when the state received a grant for public schools to get Macs for 7th graders....

Many months ago, one of my friends jumped out of bed and proclaimed (with meaningful background music), “I’m going to go for a 100 mile run this summer!” Actually, I’m not sure how it all went down, but I like to imagine it with a dramatic...

And, this past month, I tended more towards the bug. May was a difficult month for me, which included tough life events and just having a lot going on. Part of it may be considered self-inflicted, and the other part, the universe working its magic.  Here’s the...

What I Learned On Katahdin 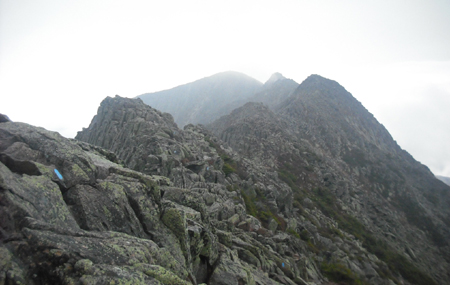 This past weekend, I hiked Mount Katahdin with my British friend Phil. He had always wanted to go but thought it was too dangerous to attempt alone. I said when he visited Maine again, we’d do it.

The plan was to park at Roaring Brook Campground, hike the Helon Taylor trail, take Knife’s Edge to the summit of Katahdin, hike down Cathedral then Chimney Pond trail back to Roaring Brook. It is a long and difficult hike under normal circumstances. Attempting this in October is not something I plan to do again, mostly because I was really stupid about it.