Many months ago, one of my friends jumped out of bed and proclaimed (with meaningful background music), “I’m going to go for a 100 mile run this summer!”

Actually, I’m not sure how it all went down, but I like to imagine it with a dramatic flair.

Once I determined that he was still sane, I agreed to help to run a fraction of it with him. After all, this is the person who convinced me a couple years ago that I could totally run a marathon, and has dragged me through a couple so far. So, I figured the least I could do was return the favor.

And that’s the story of the (first) time I volunteered to run 20 miles in the middle of the night on the Sunrise Trail. My friend started running around 4 p.m., and I joined in from midnight to 4 a.m. (aka The Graveyard Shift). Here are a few life lessons I learned along the way:

1) Sometimes, you need to readjust. Less than 2 miles in, I got vague pain in my head. No worries, I reassured myself, this is all new territory, you had a lot of caffeine today and are running at midnight. But by mile 5, this headache had grown to epic proportions.  I didn’t want to say anything, partially because of the searing pain and partially because I felt responsible for getting my friend through the next few hours of running. Don’t be a flake! screamed the voice in my head.

And then, we made a brief pitstop to adjust headlamps (this was my first time wearing one). Almost as soon as I took mine off, a surge of blood rushed back into my head. That’s right. My headache was the result of cutting off circulation to my own brain via headlamp. 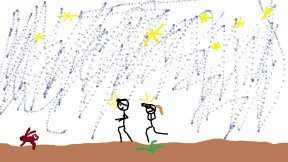 A crude artistic rendition of the incident. Note: There was actually a bunny, and the stars were this amazing.

While this was, to say the least, uncomfortable, there’s a good life take-away: as you move about your day/life in general, if you feel like your head is about to explode (literally or figuratively), then something needs to change. The answer may not be as simple as oxygen deprivation, but once you find the solution, moving forward becomes a lot easier.

2) Trading passion for glory isn’t worth it (that’s right, Eye of the Tiger). So, the biggest question people had about the whole running 100 miles was “Why?” Well, my friend basically said, “Why NOT?” It amazed me that someone could be so passionate about, well, anything. The fact that there was no tangible prize at the end of this thing baffled me. He was just doing it for the sheer sake of doing it.

This reminded me how refreshing it is to do something you love free of ulterior motives. I’m guilty of getting a bit too competitive when I run, despite the knowledge that it’s bad for my mental well-being. In this undertaking, my friend reminded me (note: he has also told me this on many, many other occasions) that relying on external factors, be they medals, praise, a promotion, etc., isn’t a great reason to do something. Do it because it’s what you love to do, and let that be all.

3) It’s an adventure! Towards the end of my shift, neither one of us spoke unless necessary (me due to sleep deprivation, and my friend because he’d been running for almost 12 hours at this point). The only noises were our feet hitting dirt, some bullfrogs, and an owl. At one point, probably around 3 a.m., it was dark- as if all the light but our headlamps had been sucked in a vacuum. And then, the sun started to rise.

Perhaps delirious, I got inexplicably excited by this. We were running toward the sun! It was all an adventure! Life is an adventure!!! My brain was full of exclamation points. 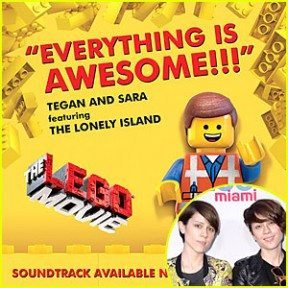 This was definitely the song playing in my head.

At this point, I was reveling in the craziness of running 20 miles at midnight, and was struck with how awesome my surroundings were- the trees, the frogs, the flowers, the sky. Finding joy in the simple things genuinely makes the world seem like a better place, no matter where you are.

4) Never underestimate your friends. I know I’ve said this before, but I’m going to say it again: it’s comforting to know that other people will support you, no questions asked. Even if they think you’re a little off your rocker for wanting to run 100 miles in the heat of summer. I was just one of many who participated in this run, and there was a ton of support via Facebook. Sometimes, just showing up is enough. No matter what your goals are, it’s always good to have a support team.

5) Push your limits, but know when enough is enough. Ultimately, due to the heat and humidity, my friend decided to stop running after 85 miles. It was a smart decision, anddifficult to make. Setting goals and aspiring to do things you didn’t know you could do (running 85 miles, learning how to use Photoshop, teaching yourself how to breakdance) leads to personal growth (which you probably already knew), but the tricky part is balancing this with knowing when it’s time to tap out (and not viewing it as ‘giving up’). This is something that I struggle with, and don’t have a cookie-cutter answer for (maybe because it doesn’t exist).

I’m thankful that my friend asked me to be part of this run, and am so proud of what he accomplished. It was a tremendous feat, and it all happened because, quite simply, he wanted it to happen. How many times will you get to run the Sunrise Trail at midnight with a good friend? As many times as you want.