Not matter how you feel about giving money, donating, tithing, or volunteering, I think we can all agree that it’s fun that online has their own version of Cyber Monday in the way of Giving Tuesday. Sure it’s a poke at the consumerism of the season and...

Domestic violence is a cause pretty close to my heart, for a mainly selfish reason. I (at one point) thought I was too smart, too straight-forward, too butt-kicking to be in an abusive relationship. It was years ago since it happened but I still remember the yelling,...

Every Monday, it’s an example of a business, non-profit, or website doing something interesting to promote itself online. Got an idea? Let me know!

Now I’m not a big fan on national cable companies but I thought how Time Warner is handling their Disney/ABC negotiations pretty interesting.

They are keeping customers informed via email.

I’ve gotten a few updates about the current negotiations via Time Warner Cable email (and yes, I opted not to receive anything extra). I haven’t unsubscribed because these emails aren’t frequent. Also in their favor is they tend to be short and all driving customers to another website if they want longer versions of anything:http://www.rolloverorgettough.com/

They are driving their customers to a separately branded website.

Time Warner needs to keep running its day-to-day operations going on their company website, and these cable negotiations are a small part of what it does. So, for this ‘campaign’ they’ve set up a different website for educational (and political) purposes. I appreciate how they have their company name in the sidebar (as in they aren’t pretending to be some third party group). But it is smart of them to keep their advocacy separate from their business, at least in terms of branding. 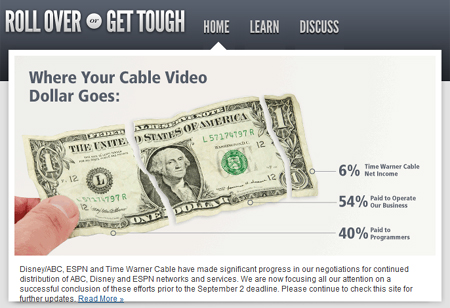