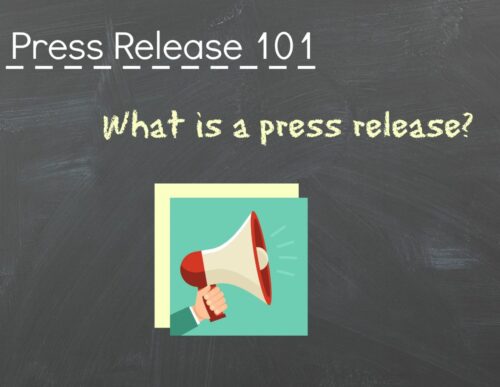 Got an exciting new product or service, and need to get the word out? Most small businesses  have a limited advertising budget, but you can try for some free publicity through your local newspaper, newsletter, online news site, television and radio stations, etc.

Often businesses will write press releases for trade publications with a niche audience who might understand industry jargon. For our purposes we’re going to talk about writing for a general audience so you get customers through the door of your store, get the cash donations flowing, and get some butts in the chairs at your fundraisers.

What is a press release and what does it do?

Simply put, a press release is an announcement directed at media outlets, written in a way that resembles a news story — the kind you read in a newspaper or online news site. A press release conveys news — hopefully good but sometimes in a response to an unfortunate event — about your company or organization.

A press release is not an advertisement — paid or otherwise. When you buy an ad, you’re in control of the content. Not so with a press release, whose content, after submitted, is at the whim of the news department. Even so, there are some basic rules in writing a press release that will help grab the attention of an editor and give your release a better shot at reaching an audience.

Even though you’re promoting a product or service, you’re not writing ad copy. You’re writing news copy. And the more your press release sounds like news copy, the fewer edits it’ll get at the copy desk, which means more of your original message gets conveyed.

Next week, I’ll explain the ins and outs of writing a press release