Marketing Tactic: Doing Something People Aren’t Willing To Do 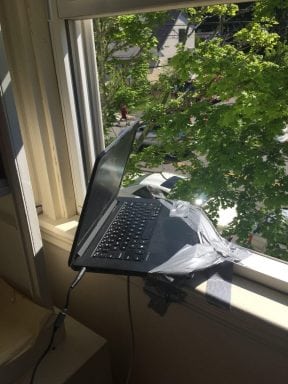 As Tim Gunn would say, I ‘made it work’ so I could live stream the Bar Harbor Fourth of July Parade as I promised by duct taping my 15 inch laptop out the window.

Bar Harbor, Maine has an epic Fourth of July celebration. It starts with the local Rotary Club’s Pancake Breakfast, followed by the parade at 10 am, and an afternoon of activities that include a craft fair, lobster races, and the MDI Seafood Festival (and, for many, a very popular activity commonly called “shopping”). In the evening the Town Band plays opening act to an impressive fireworks show that caps off the day. In addition to these Fourth of July spectaculars, Bar Harbor also happens to be the town one of my coworking spaces is in.

This year, I saw a few people in Facebook groups asking if anyone was going to livestream the parade. I had already agreed to volunteer the lunch shift at the Seafood Festival– and since I was coming into the fray anyway, I decided why not do something nice by coming in a little earlier and streaming the parade.

Despite using computers all day in my work, I’m not much of a computer hardware person so I started testing an hour before the parade. It took me a bit to figure out that I couldn’t use the amazing camera on my iPhone 6 for a continuous Facebook Livestream because the connection kept resetting.

After a few false starts (with people watching), I realized I could use my laptop camera and plug that directly into our network so I didn’t have to worry about WiFi. Once it was working, I duct taped my whole setup halfway hanging out our window.

In doing this, I figured out why people hadn’t offered to do it: it’s a pain. You need good internet, good equipment, a good power supply, and a good location.

Because we did the broadcast from Anchorspace (our coworking space), I did the Facebook Live broadcast from the Anchorspace Facebook page. I posted to a couple local groups and to my profile how to access the video (the direct link to where all our videos on our page are: https://www.facebook.com/anchorspaceBH/videos/)

I told them that Friends of Acadia was also livestreaming, linked to both pages, and posted that if they ‘liked’ either page, they’d get notified when the broadcast started. A little salesy? Yup. Instructive and useful though for people unfamiliar with Facebook Live? Absolutely.

Here’s what I was reminded of: when you go out of your way to do something people are asking for that no one else seems to want to do, they appreciate it.

Now these weren’t just 25 Facebook likes I bought off the internet but real people connected to Bar Harbor–whether living here or coming regularly on vacation–the exact people I want to know about Anchorspace.

This group’s first interaction with us showed them that I was resourceful, fun, and tech savvy.

We also generated a lot of goodwill. People watched from other states, wishing they could be here. One woman recovering from an illness wasn’t able to attend but was grateful to watch. While these types of goodwill are not measurable, they are still worthwhile.

In other words, I think it’s always nice for us to look around our communities, our markets, our lives and see where people are asking for things without people providing them… and if we can help, we should. It’s our responsibility as people to make things easier for others… and if we make a few sales or get a few Facebook likes in the process, that’s ok too.

And if you want to watch the parade, here’s the recording (feel free to fast forward through the first five minutes as I figure out the issue and duct tape the computer to the window sill!):