Lessons From The Side Hustle

I think it’s safe to say that both Kassie and I are addicted to Side Hustle School, a podcast by Chris Guillebeau. I started listening because I thought it was interesting to have this short podcast, non-interview format. Most podcasts are 20-40 minutes with an interview and this one is typically 5-8 minutes with Chris being the only voice. I was curious how he’d keep it interesting… not to mention learn from the kinds of businesses he profiles.

The idea of the side hustle is it’s something you do outside your day job to earn a bit of extra money. Sometimes it becomes a full time thing of course (ex: the company website this blog post is on started as a side hustle while I worked at a newspaper). Mainly though, a side hustle is just that a fun, income generating, part time project.

I’ve conservatively listened to 75% of the daily episodes so here’s what I’ve gleaned so far.

Build it as they are coming (or even only build it if they pay you up front). 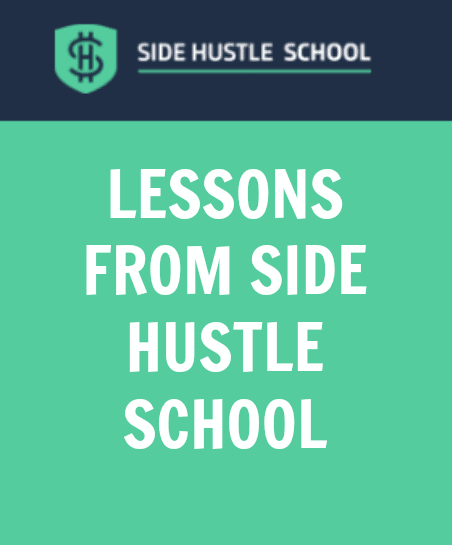 In a lot of cases, marketing for the side hustle started WAY before it was ready. In one case, a woman began collecting email addresses before her cookbook was even ready… so when it came time to sell it, she had an audience waiting to buy. In another (which I can’t seem to find on the site) a guy studying for some kind of exam given to doctors made a landing page where people could pre-buy his study guide. He didn’t make the study guide but when enough people were interested, THEN he pulled it together.

So get your marketing ready even before your product or service is ready so you can start building excitement… and collecting potential customer contact information.

If people keep asking for it, it might be an upsell.

If people keep asking if you deliver your homemade cookies, chances are you may be able to upsell a delivery service with your cookies.

You want to look for this feedback coming from different places, not the same group of friends. For example, when our web host friends, web developer friends, and clients started complaining about how annoying it was to keep WordPress website software up-to-date, we started a WordPress Insurance service for $25/month.

What are your customers complaining about or asking you for? This might be a place to start.

Controlling as many things as you can keeps things in control but it does limit your profit/scale.

One of the companies profiled was a cleaning service created by a student. There was a point in business growth where he realized he’d make a lot more money if he worked with other reputable people who helped clean the houses… but it also meant he had to create systems and other ways he could control the quality of work being done by other people. Keeping things in house, like if you are manufacturing your own candy hearts with custom messages, you are limited by how many you can stamp out in a day… but that might be ok. Just know there are tradeoffs, always.

If it doesn’t work the way you want it to, be flexible.

There are certain kinds of businesses that seem sexy to open: bars, coffee shops, restaurants, etc. The problem is most people can’t go from zero to their own cafe, financially or otherwise.

When two friends wanted to open a distillery and saw all the regulations, they decided to make homemade gin kits… and were a success. If they had been inflexible about how they were going to get artisinal spirits to the masses, they would have lost out.

Most careers, if you really think about them, have a way that you can step into them… because the idea with the side hustle is…

Risk as little as possible.

Yes, you should spend time building or trying things,  but don’t sink thousands of dollars or hundreds of hours into something. Look for a quick win, even if it’s small, which can encourage you to stay on the right track. For example, an orthodontist as an experiment spent $500 on Facebook ads but rather than just ‘boosting’ them to make more of his friends see them, he used them strategically to attract patients seeking braces with a $400 off coupon. He didn’t build a whole new section of his practice or do anything crazy; he just tried something small and when it was a win, he could adjust other things accordingly and move onto the next win.

If you’re interested in small business development, making extra money, or just hearing people with cool ideas, listen to Side Hustle School. Whether you have never had a business or run several, I guarantee it’ll give you ideas for moving ahead.