Accountability Partners: The How And Why 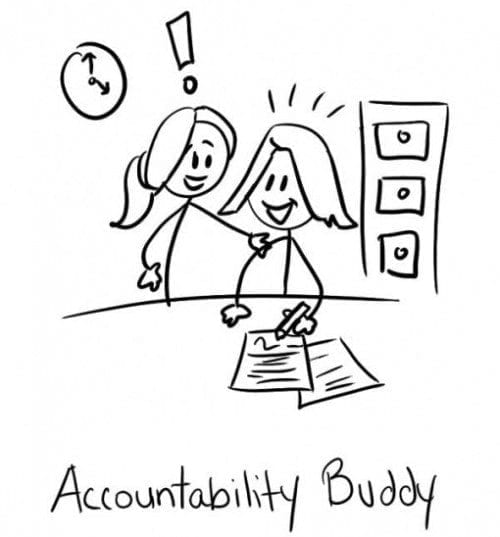 Accountability is key! Image from: http://hauterepublic.com/blog/

As part of a business program I am doing, one of the challenges proposed was to get an accountability partner and check in with them once a week.

Initially, I thought of this as one more meeting I had to go to but sighed and said I was in. (My usual strategy to something I think will be good for me is to try it at least, even if I think it’s lame.)

I got paired up with A, a photographer and graphics designer in Atlanta Georgia. (A random matchmaker in the group paired us up based on being in the same time zone.)

It’s kind of funny to have gotten to know A as I’ve gotten to know her. Normally when you meet friends, you get to know each other slowly. Maybe you exchange some small talk in the break room.You might send them a “Happy Birthday” message on Facebook or be pleasantly surprised to run into them. But in general this friendship is built over time and starts off casual.

An accountability partner is kind of like getting right to the ‘best friend’ part of the relationship. It’s happens fast because it has to.

A and I had a first conversation (about two hours) on the phone where we spent an hour telling the other our respective back stories. While you might think this might not be adequate time, it was relatively intense and, at least speaking about me summarizing my whole life in about 50 minutes, I can say A knows enough about me from this conversation to be friendly but more importantly to be helpful.

As I write this, I am not entirely sure where A went to college or what religion she is (though I could easily look that up on Facebook because we’re friends or ask her the next time we talk). It’s not really the point.

So if you don’t share anything in particular (even an arbitrary interest) you might ask ‘Well what is the point?’

After the first getting to know each other conversation, we set our 3 month, 6 month, and 12 months goals. We wrote them in Google Docs and shared them with each other. As stuff gets done, we cross it off (no deleting- we want to track progress). Every week (well most every week), we have a check in phone call.

What’s hilarious is that despite taking up an hour every week in my life, this has actually been pretty useful. Talking to A about what I’ve done and not done makes her part supportive friend, part impartial third party, part tough love.

And tough love, I mean asking me the questions I should be asking myself. We didn’t I email that person I said I would? Oh right, because I’m scared they won’t want to work with me. She’s never pushy, just inquisitive. We all need nudging and I’m glad she does it.

Because A and I don’t have lots of time together, we don’t have time to tell each other stories or think of false excuses. We get right to the point. Sure we vent sometimes but it is never long winded  when we do.

The relationship I have with A is unlike any relationship I’ve had with anyone. It’s useful to both of us and, while I’m sure we’d be actual friends if she lived closer or we shared some interest together, it’s kind of better that we aren’t. I don’t have to run into A after admitting to a petty thought. I don’t have to tell her why I am so frustrated that I gained three pounds last week. Her being friend, impartial third party, and nudger in one means she is also not one of those things. She can acknowledge, give an idea, and move on. And I do the same for her.

Now you might ask yourself, how do I get an accountability partner?

First off, it helps if you are set up. The program I’m in does that but your alumni association, business course, or some other group you belong to might be able to set you up. Several places online seem to be able to help you if you are willing to pay a bit of money (my program costs money). The only free one I’ve really seen is this Reddit group.

But ideally this person is someone you don’t know well but someone you can trust whose perspective you can appreciate. If A and I after hearing each other’s backstories didn’t see some common values or ideas, I am sure we would have both opted for another accountability partner option. While I would have probably been offended, I know it would be better in the long run to work with someone you are very compatible with. This isn’t just someone you go hiking or drinking with; this is someone who knows things about you that lots of other people don’t so choosing the right person should take time and effort.

If you want something more intense, this is one of the coolest articles I’ve read this year about an accountability group (It’s a long one but worth a read).

And as a third and final alternative, if you like the idea of a group but want something a bit less intense and a bit more short term of a format than The Elephants, you can always start or join a goals group.

So while I didn’t invent this idea, I did want to let you know that it’s not hokey or weird. It actually has been working really well for me! Accountability can sometimes be lame (or maybe a little scary) but having someone to be it with makes it much less so.