If you like being in the water but are bored to tears by the thought of doing laps, I’ve got the sport for you: underwater hockey. Here’s how I got into it recently.

I’ve had a lot of work the past two months so when I’m not working, I’ve really been trying to have my fun away from my computer. (For example, I’ve held two Too Cute Tuesdays, I just haven’t been typing them up!) But since multiple people have asked me about underwater hockey, I thought it deserved a written and illustrated explanation. 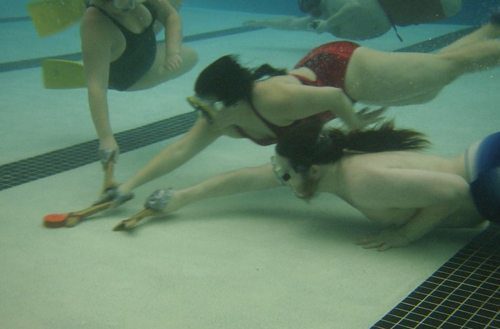 You push the puck at the bottom of the pool.... seems simple enough, right?

The idea is you use a puck (it seems like the puck you use in floor hockey, it is has a bit of heft and is rubberized) and use Y shaped sticks to push the puck on the bottom of the shallow end. A few tips:

1. Gear includes snorkel mask (snorkel optional) and flippers. If you wear regular goggles that just go over your eyes and someone hits you in the face, the suction could give you a black eye, like the girl of legend from Maine Martime Academy.

2. Wrap your dominant hand in duct tape or get a motorcycle glove if the bottom of the pool you use is not tiled and has some kind of rough texture so you don’t cut up your hand. (Also this explains the gleams of silver you see in the pictures!)

3. Goals can be made of weights and rope (so long as the rope floats upward of course) on each end of the width of a pool. Our pool is a standard 8 lane 25 yard pool. 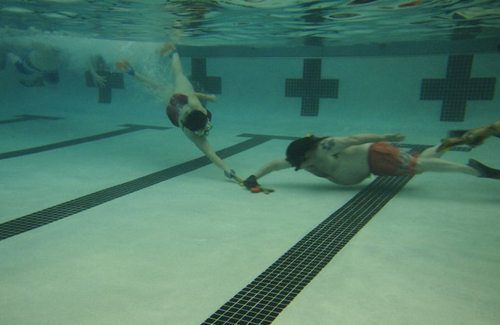 Nice defensive move by Diver Ed, the founder of the Underwater Hockey League against me. Well played, my friend.

4. Stay low. Trying to stab at the puck from above is nearly impossible. It’s all about pushing the puck on the sides and keeping yourself low.

5. While the puck is technically out of play if it hits the slant of the deep end, people will play on.

6. Memorize swimsuit colors and flippers of your team so you recognize them underwater. (If you’re a guy, try a bathing suit that isn’t black so I don’t pass to the wrong person on the other team who also has a black suit!)

7. Underwater cameras are cool and much cheaper if you get them on Ebay. 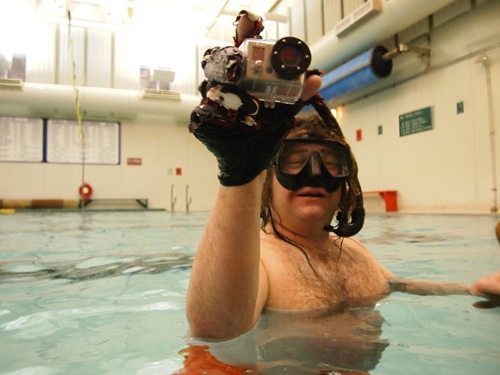 If you going to play an extremeish underwater sport, capture it on video so you can put it to music and share it with your friends.

So there’s a video on Facebook on the off chance it’ll play for you: https://www.facebook.com/video/video.php?v=1869060321675 We’re trying to get it online somewhere embeddable but for the moment, that’s where it is.

Interested in giving this a shot? This game is played pick up style. Come Thursdays, 7:45 pm to the MDI YMCA pool in Bar Harbor, Maine. The best thing to do though is get on the email list on Diver Ed’s website: http://divered.com/ in case a game is cancelled or anything.

And if you aren’t near Bar Harbor, starting a league is pretty simple. Just Google ‘underwater hockey’ and you’ll see lots of suppliers (different sticks for different positions, crazy!) or you can do it low tech like us with homemade wood sicks and rope goals. Either way, the hour will fly by and it’s a pretty fun way to get a workout.