To anyone just starting to use Twitter, it can seem like some exclusive club of short hand and something called hashtags. Hashtags are basically a pound sign followed by a word. Here are some examples: 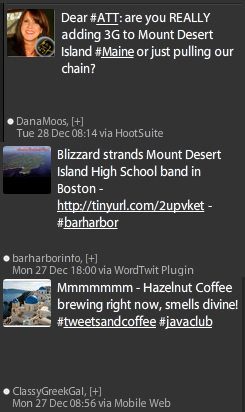 A hashtag can have a few functions in Twitter (for categorization or run really):

A regular (informal) event
For example, I follow #tweetsandcoffee because @danamoos and a few other people I follow (mostly in Maine) use this hashtag in the morning and it’s sort of a fun coffeebreak-like thread of conversation.

A more common example of a regular informal event #followfriday. People will list people they follow in a status update followed by #FF or #followfriday as a way of sharing who they think are cool people with their followers. (Note: I forget to do this most weeks so I am not a good example!)

Virtual event organizing
I know a blogger who has a virtual #duckfest where chefs following this thread all cook with duck and post their recipes with this hashtag. Oddly specific but he’s able to organize chefs across continents!

Duckfest: A virtual event which bloggers and chefs participate in the cooking of duck.

If you’re at a conference, sometimes the conference will have an official one (like #poptech’s last conference) which allows people to tweet about what sessions they are in and allows those not able to attend every session to just follow the hashtag and get a feel for what they missed. It’s also a nice way to network with people at the conference. For example, I listened in on video conference to the speakers and was able to talk with people at the event via Twitter.

As you see from my duckfest example above, it’s easy to follow a particular hashtag if you have something like Tweetdeck, which is a Twitter client I use to manage my incoming information.

Fun aside
Sometimes you can use a hashtag as a way of adding to a status update without having it directly written in it: 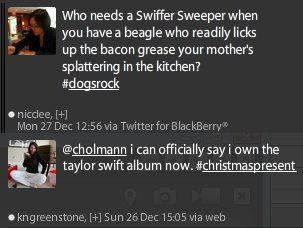 Hashtags can also give the mood of a status update without being in the actual sentence.

Hashtags can add to the mood of a status by being a sort of fun aside.

Now that you get what hashtags can do, you might want to know how to find them.

To find hashtags, you can use the Twitter search function or this website: http://hashtags.org/ You’ll also find out about some by following people in your geographic area, in your industry, or who have your hobbies on Twitter.

To save hashtag information so you don’t have to look it up over and over, just do a search (ex #maine) and then click the ‘Save this search’ button in green when the results come up on the Twitter website. You can also add a column on Tweetdeck and keep up with them that way (which is what I do since I don’t love the Twitter interface). This way, you can follow and contribute to multiple hash tags over time. Some will be short lived (like conferences) but some will always be of interest to you (like #Photoshop if you use this program everyday for example).

So now you are in the know about hashtags. Not so bad, right? No need to be intimidated by them, just try some out for yourself. The thing with Twitter (and all these other social media sites) is everyone is experimenting, just like you are. So just jump in and #lovetwitter!