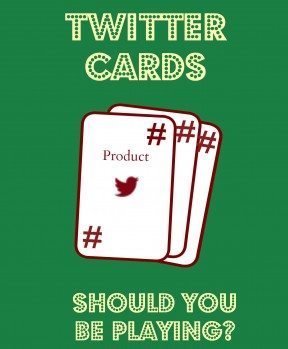 Last year, Twitter introduced a new feature called Twitter Cards. They’ve really started to push the Cards this summer, around the time that I was getting introduced to Twitter generally (and no, I do not in fact, live under a rock). It seemed worthwhile to investigate, and determine if Twitter Cards are actually beneficial or just another pushy social media experiment. 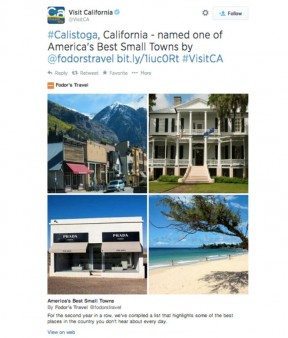 An example of a Gallery Card, from https://dev.twitter.com/docs/cards/types/gallery-card

It may not appear to be anything impressive or noteworthy- look at it, it’s just a picture and some words, and it happens to be on Twitter. So what? As is the case with most internet-related content, there’s actually more than meets the eye here. A website has to have Twitter Cards set up in order for this image to happen, otherwise, any links that get shared on Twitter will show up as, well, links (more on Card setup later).

There are 8 different kinds of Twitter Cards (and you can have as many as you want):

The great thing is that you don’t even have to use all of these cards (or any, for that matter). Just determine what appears to be the most beneficial for your business, and use those. Do you have an online store? Consider the product card. Are you an App developer? You probably should have the App Card. And so on.

Since Twitter Cards are relatively new, there isn’t enough big data to showcase their success (or lack thereof). Here are a list of pros and cons:

First, Twitter Cards give Twitter a more visual component. Sure, you could share pictures before, but if you wanted to link to a website, it wouldn’t pull up a picture to go along with the text. As we’ve mentioned before, when you can integrate appropriate visuals to enhance text, people are usually more interested in what you have to say.

Not only do the cards make Twitter a more visual platform, they also work for your website. For example, the Summary card gives viewers a rundown of what your website is all about, which may be more enticing than a bare link. An image, brief description, and title are more appealing (and have more value) to the human psyche than a string of letters and maybe some symbols. Additionally, having a Player Card for your audio and visual content could get more people watching your video. I’ll admit, I’m a bit lazy, and the more things I have to click through to watch a minute long video, the less likely I am to commit. The Player Card lets you watch it right on Twitter. The Lead Generation Card also makes life convenient for your followers: This newsletter looks interesting, but it’s probably a pain to subscribe…Oh wait, I just had to click the button? Boom! 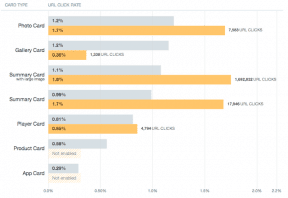 A sample of the analytics you can get from the cards.

It seems like this is Twitter’s way of getting in on the visual game, moving towards Facebook or Google+’s image sharing capabilities. As someone with a younger brother, I’m overly sensitive to the whole “copycat” business. Be yourself, Twitter!

The message that “this is good for you and your business!” may be true, but don’t be fooled- Twitter Cards are just as much for Twitter as they are for you. They’re looking for ways to boost numbers of users and engagement for their own purposes, and they’re hoping the Card option will achieve just that.

You have to jump through some hoops to set it up, and is it really worth it? Ok, in the grand scheme of the universe, 15 minutes or less isn’t really that much of a commitment. But seeing the meta tags that one has to add on a website seems a bit daunting, even for someone who is somewhat familiar with code. The good news is that sites running on WordPress have a few plug-ins that can do the heavy-lifting. Otherwise, you have to do it manually.

The best way to determine if Twitter Cards are worth your while is to try it out for a bit. Most of the “annoying” occurs during the set-up process, but you may end up reaping some serious benefits. Check out your own analytics, and if you see an uptick in engagement or traffic to your website, it’s probably worth it.