Usually if I haven’t been writing blog entries it’s because I’ve been doing other interesting things. I spent last week working really hard so I could take a vacation in the form of a slightly extended long weekend. Two of my college friends Bailey and Jeremy (now married to each other) bought a house in Portland Oregon about a year ago and the rest of us on the east coast descended to check it out. It’s was a lot of catching up, food, bad television watching, and general hanging out.

Sunday, we changed it up and rented a minivan, packed up the Voodoo Donuts, and Jeremy drove the rest of us around to sample some of the fine wines in the Willamette Valley region. 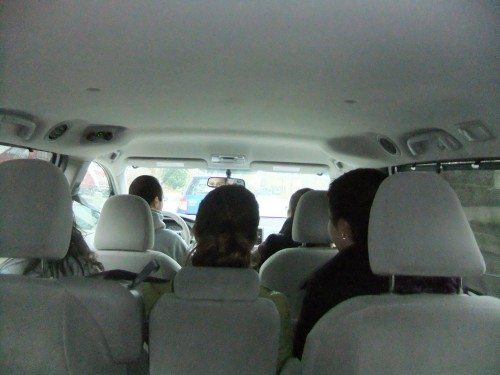 We rented a van so we could all be together which led to a lot of joking about being a whiney kids with our soccer parents Bailey and Jeremy driving us around.

Now I’ve been wine tasting once but never in an area where so many wineries are so close together. I was struck by the fact that each place really had a distinct feel to it. 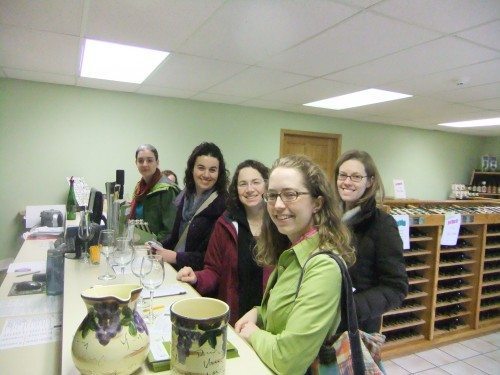 The open almost office-y feeling of Oak Knoll was a good start to the trip. Six tastings for $5, can't beat it!

Our first stop was Oak Knoll Winery. Jeremy and Bailey had a case of their wine we had been enjoying throughout the weekend and since it was only about 20 minutes from their house, it was a logical place to start out. Pop music blared on the radio and the area was pretty office-y in terms of environment. If I could have shipped a case of their sale wine for $40 home to Maine, I so would have. Darn state laws! 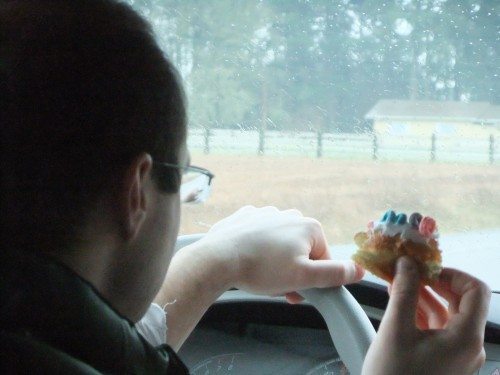 Driving a group of girls around is so much easier when you have a Voodoo Donut and some good music going. Thanks Jeremy!

Our second stop was Raptor Ridge, which we were hoping was a dinosaur reference. The woman at Oak Knoll pointed us in Raptor Ridge’s direction, mentioning they had built a whole new tasting room with a gorgeous view. So piling into the white minivan, off we went. 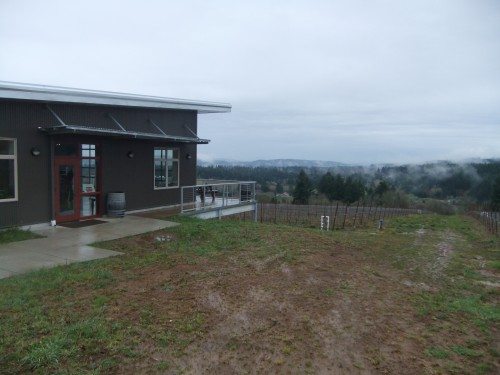 Raptor Ridge tasting room had quite a view even on a foggy day.

Raptor Ridge had a much more contemporary setup with a great view. It worked out well because they had a ‘smelling wall’ and several area magazines for perusing while we waited for the group before us to finish up. (One thing learned: Raptor apparently refers to a bird, not a dinosaur by the way.) 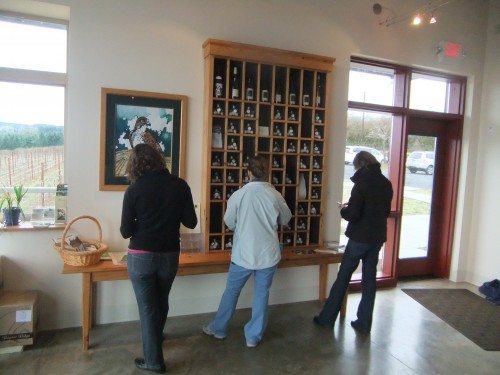 We waited in style by smelling bottles and trying to figure out the scents inside.

The tasting fee here was a steeper ($10/person for five wines) but for the view and the experience of some complex pinots, it was fantastic (versus Oak Hill which seemed to specialize in fruity blends). 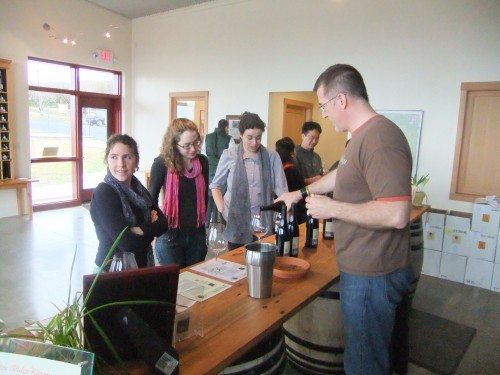 The Raptor Ridge Pinots were a bit more complex than Oak Knoll. Sarah D. bought Bailey and Jeremy a thank-you-for-hosting-us bottle of wine.

We then stopped for a lunch break before moving on to Duck Pond Winery, another winery that was suggested to us at Oak Knoll. Clearly a much more commercial operation, the whole thing centered around a gift shop and was in a huge building. The complimentary tastings were alright (free is always a good price) but feeling a bit ignored, we left without even taking any pictures. 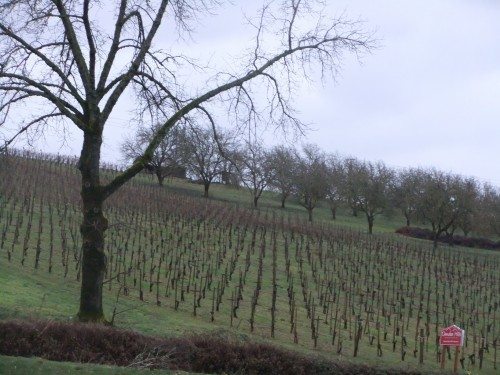 The surroundings of the Red Barn tasting room were more gorgeous than I could capture.

Our last stop was probably our collective favorite: Maresh Red Barn which had a very pretty drive going out to it. Bailey and Jeremy are wine club members there which meant we had free tastings. The best part was talking with the retired owner who told us about how he started the vineyard and kept the winery open back when bankers wouldn’t give him any funding. They told him ‘grapes won’t grow here’. Over 40 acres of productive grapes later, that is clearly not the case.

The interior of the place was an old barn with a woodstove. It was so homey and the owner was chatty that we all just stood there for half an hour, listening to him and enjoying being with each other. 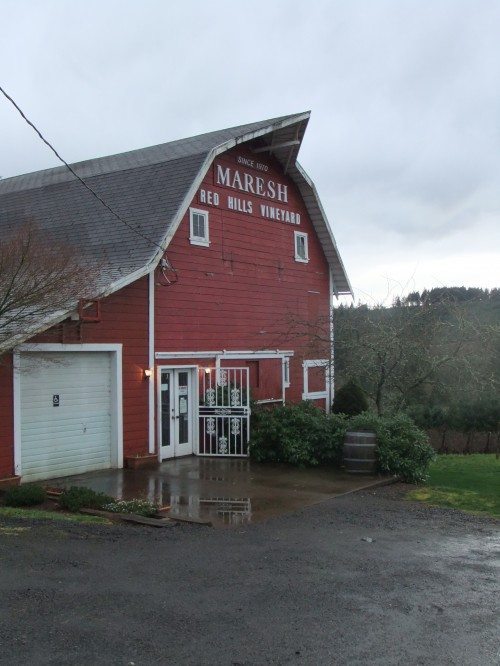 The Maresh Red Barn Vineyard is the wine club our friends just joined. Better deals, invitations to events, and more are the advantages to being a wine club member.

Overall, it’s really great how each vineyard is able to keep its unique identity yet they collectively are able to market the Willamette Valley region.

That said, a lot of these places needed help on their websites and only two of the four places we went to even implied they did social media and only one counter urged us to sign up for the email list. Come on Willamette Valley, let’s see you online a little more so I can visit you virtually a bit more often. Websites and wine get better with time!

Thanks to my friends for such a great visit: Bailey and Jeremy for hosting, Lydia for her cooking and entertainment, and Sarah D., Sarah C., Hannah, and Meg for being my travel companions from the east coast. No matter what we did, I know we would have had a great time… but the wine was really fun!