Storytelling has, for a long time, been an important part of human culture.

Brand stories are the 21st century version of Greek myths- in other words, they’re origin stories that explain the purpose of your brand’s existence. People build brands so why wouldn’t they have stories?

The art of storytelling has even become a sought after commodity, with people paying thousands to take seminars offered by the likes of Michael Hauge (the guy who wrote I Am Legend) or this workshop from Storybrand. While these classes undoubtedly improve your writing, we don’t all have the time and/or money to throw at this sort of project.

The good news is that you can still gain the benefits of learning how to tell a story without spending an obscene amount of money. 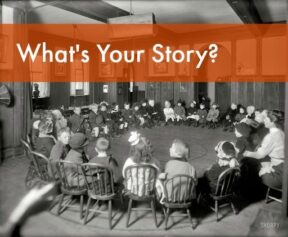 “The human brain is drawn to clarity and away from confusion. If customers are confused about what you offer, they’ll look past you for somebody who can say it clearly. Once you clarify your message, your company will begin to grow.” – Donald Miller

Elements of A Good Brand Story

Put a person in it.
Imagine trying to relate to a corporation like Walmart. It’s tough, right? How can you really grasp that same sense of empathy, the same sense of relating, with something that’s, for the most part, intangible? Unless…maybe one of your friends had an amazing experience at a Walmart, or you hear a story about how they did something great for the community or a cause that you also support. Suddenly, this makes it a little bit easier to relate. Actual people have been brought into the mix. By telling a story, you’re adding a level of human connection, that you wouldn’t have otherwise.

Use an anecdote.
Speaking of people, one of the common ways to hook people into your brand’s story is incorporating an anecdote. An anecdote is short and entertaining, and can be useful in getting people hooked into a greater discourse (i.e. if you’re giving a speech or presentation, or starting a blog post). Most people remember stories more than statistics, so not only are you grabbing their attention, you’re increasing the likelihood that you’ll be remembered. For more tips on utilizing anecdotes (and a really great example), check out this plot post: http://beabetterblogger.com/blog-anecdote/

It’s not all about you.
Just because it’s your brand doesn’t mean it always has to be your story. You’ve probably seen examples of this pretty frequently, like in this Swiffer commercial. This family has moved and they’re getting used to the rainy weather (and the mud that comes with it). The story is more focused on the family- Swiffer’s target market- and how a certain product is helping them transition in the next phase of their life. The product was on the sidelines of the story, while the audience empathized with the family, their move, and of course, dealing with dirt in the house.

Again, there are tons of examples of this out there. The key is to not be an overwhelming presence, but enough of one that people aren’t left wondering what they were even watching an ad for.

Share a time when you failed.
It doesn’t have to be all kittens and rainbows. In fact, a lot of people really enjoy stories that involve overcoming an obstacle or some type of comeback story. In sharing this type of story, you’re sharing a moment of vulnerability with customers. Take this list of six successful entrepreneurs. At face value, you’d probably assume that there’s no way you could relate to such people. But, as the list shares, these people had some serious brushes with failure before becoming as successful as they are today. By sharing this type of story, you’re allowing others a peek behind the mask (i.e. allowing a bit of vulnerability) while creating a stronger bond with them.

It doesn’t need to end.
Your brand’s story doesn’t have to have an “end” like other stories. I mean, why would it? You kind of want it to keep going…so rather than “The End,” it’s better to approach it as a “To be continued.” The best advice I’ve seen about a brand story is from a blog post by Kissmetrics:  “It [the story] should suggest the beginning of success and continuation.” Customers should have the impression that there’s going to be more to the story. Otherwise, why would they bother establishing a relationship with you?

How To Tell A Good Brand Story

Practice.
This is the least sexy tip but practicing telling stories is the best way to get better. Nicole is a member of a local business group much like BNI. Part of the BNI meeting structure is to give a weekly 60 second presentation. By doing this almost one year, Nicole has gotten a lot of practice being concise… and the feedback she gets about the sixty second presentations has allowed her to know which ones should be expanded and which ones were less interesting, almost like a really nice focus group. Go to BNI.com to attend a nearby meeting. Toastmasters is another organization that lets you regularly practice telling stories (more of a public speaking group). Invest some time and effort in practicing your story.

Tell it in multiple ways.
Whether someone is reading an Instagram caption or your 50 page ebook, tell your story in a variety of formats but keep your ‘voice’ (ie brand) the same. It gives you a chance to test out different mediums, which is a great exercise for all writers. Full disclosure- there are some formats that you’ll like more than others, and some you may not like at all. But, we have to say, it comes with the territory and you will emerge a better writer for the experience!

Let other people tell it.
People more likely to believe peers, or people they consider similar to themselves. It doesn’t that I’ve seen a lot of recently are sponsored blog posts. Companies like Blue Apron will offer certain bloggers a free trial or sample of their product in return for product reviews getting featured on the blog. This means someone else is sharing your story, AND they’re sharing it with other people who, we assume, value their opinion.

Here is a prime example from Blue Apron-I’ve seen a couple posts about their product from a few of the blogs I follow (Hungry Runner Girl and Shut Up and Run, for starters). 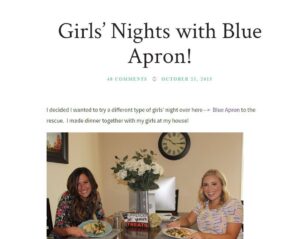 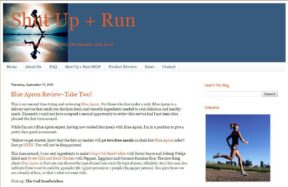 Find a formula that works for you.

Think of a storytelling formula as a recipe: you’ll follow it for awhile until you get comfortable enough to improvise with your ingredients. Here are some resources to help you think about your format-keeping in mind that there’s no “one right way” to think about the process:

The ‘Hero’ method from StoryBrand

Putting ‘story telling method’ in your favorite search engine will bring up lots of results. Why? Because 1) there is more than one way to tell a good story and 2) some methods will resonate better with you than others. So find a formula you want to try (one of the ones above or a different one) and craft several stories from that.

We are working on a series of problem-solution stories on our blog this month, partially to tell our brand story and partially to demonstrate storytelling! Click here to learn our idea and be linked to our stories as they are published.

Hopefully this newsletter and the blog posts to follow will inspire you in thinking about your brand story!