To GIF or Not to GIF?

A lot of social media platforms are now allowing you to share GIFs. GIFs are like the moving pictures in Harry Potter, they aren’t still but aren’t necessarily a full video either. In our internet travels, we’ve seen the good and bad side of GIF usage. They’re usually clips from popular movies/t.v. shows, or at least, that’s what typically comes to mind for me. Some businesses are using GIFs in a different way by creating their own and using them in marketing.

The GIF format has a few advantages. First, since it’s moving, it’s more likely to catch the eye of people scrolling through a feed. The clips are also usually short, another bonus for attention spans. There are also GIFs for almost every occassion/emotion out there, so they’re often used as a way to articulate or react to something.

Some companies or brands use them to showcase new products or demonstrations. It’s easier to illustrate than writing (and let’s face it, more interesting), and it’s easier to digest than a full (or at least several minutes long) type of video. A compilation of GIFs combined with some text instructions create an easy way for people to follow instructions. The Learn to Crochet Tumblr is one example of this.
Example: The tweet below from The New York Times uses a GIF as a way to catch your eye as you scroll.

Everything from the water you drink to the road you drive on might be run by private equity https://t.co/vc4q3wQDKU pic.twitter.com/1Bg9DXm3D0

It’s not the most revolutionary use of GIFs ever, but it’s a step up from reading the tweet sans image. A more innovative use of a GIF I’ve seen is from Dunkin Donuts, who uses it to create a conversation between two friends making breakfast plans. It’s quick, and a little bit corny, but it appropriately conveys the enthusiasm people have for donuts and coffee.

Wait, you might be thinking, making my own GIFs? That’s nuts.  There are places online where you can accomplish this, like http://makeagif.com/. Although, to be fair, most of the larger companies like NYT or Dunkin Donuts have staff/agencies on hand to do exactly this. Fortunately, there are plenty of places online where you can find a library of reaction GIFs (mainly, GIPHY.com).

A couple common places you can find GIFs are Tumblr or Buzzfeed lists, which are purely for purposes of entertainment. Some people add them into their blogs or other social media as a way to illustrate a point. For instance, there’s this Buzzfeed list of “21 Perfect Reaction GIFs to Every Occassion” (FYI, they’re all animals).

Some blogs use GIFs, in addition to images and/or video, to emphasize a point. One of my favorite blogs, Run Eat Repeat, does this pretty frequently (usually with Bravo TV GIFs, which I love even more). Below is an example of one that she used to elaborate a story about getting stung by some bees on a run: 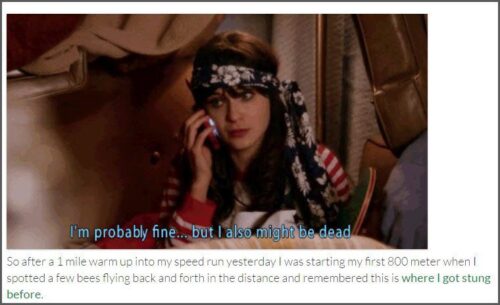 So, whether you choose to make your own GIFs, use them to express a reaction/emotion, or just as a way to further illustrate a point (kind of like a meme on steroids), consider GIFs another tool in your marketing arsenal.