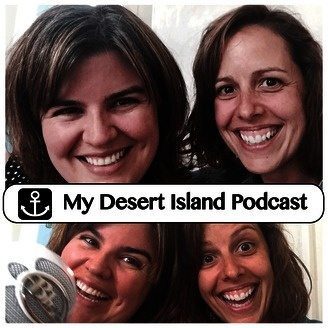 When I was cleaning out Google Drive the other day, I found a three year old document called ‘Bar Harborcast’. It was an outline for a local podcast I wanted to produce with a list of guests, a general outline for 30 minute format show, and the start of a mission statement.

(Aside: Yes, I always have a crappy working title when I have big ideas. Name of Anchorspace had a working title BHCowork in my first business plan draft. Everyone who read my plan agreed on one thing: they hated that name, despite me reminding them that I just needed to put something in there as a stand in title so I could finish the document.)

Anyway, I’ve been talking to a few people about the podcast idea as the years went on. Listening to a podcast of someone by themselves I’ve always thought is kind of boring so I was on the lookout for a cohost who could 1) commit to a weekly recording 2) who I had a good rapport with and 3) who could make the idea even better with what they brought to the table.

Nina St. Germain, my Anchorspace landlord and friend, fits all these criteria.

We launched the My Desert Island Podcast a few weeks ago. It’s not a long time to be podcasting, clearly, but I have learned a few things so far.

The second I released this, about ten people came forward. “I’ve been wanting to do this kind of podcast forever!”

My point is not to say the idea isn’t exactly unique. The difference is, we just did it.

Do I think I’m some Terry Gross protege who can do this better than anyone else? Not really, as a matter of fact, my recorded voice bugs the crap out of me. But we put it out there and week to week, we’ve been getting better. (If you want to get a quick idea of this, listen to episode 1 and then the latest episode back to back.)

When I’ve heard really crappy audio, I always assumed it was lack of a good microphone. So I bought a pretty good one ($40 and highly recommended by a podcasting friend).

Only after I was editing the intro of our first episode that I realized how echo-y things could be. We tried foam board. We tried talking closer to the microphone. We tried building sound proofing panels to hang from the ceiling. In the end, the little tent Nina brought covered in blankets not only solved the issue in a cheap way but gave us our signature blanket fort/audio yurt.

Turns out editing can get rid of voice ticks (you never realize how many times you say ‘like’ until you are editing yourself), background noise, and awkward pauses. What it can’t get rid of is echo. So test that before you invest major time recording! (Listening to things in headphones after will give you a real idea of it is a problem or not.)

Idea #3: You need the tech setup. If that intimidates you, just pay someone.

So iTunes and other websites that automatically download your lastest episodes need a feed to draw from. If you don’t know what an RSS feed is, I’m going to link to an article on this website that can help explain.

I will admit it, the amount of time I spent figuring out the tech of all this was stupid. And yes, I do tech stuff all day so I feel like I am starting from a place of more knowledge than the average person!

You basically need a website with audio feed capabilities for your podcast to be distributed via the most popular podcast apps but it takes awhile to get it right. If you aren’t confident, just hire someone to set it up for you. Seriously. And yes, that person can be me. If you have a domain name/web hosting, I can get you set up in about three hours versus the ten plus hours you’ll spend on it. Seriously, this is not something I would DIY again. I would instead spend my limited time learning about editing with Audacity and monetizing (making money with the podcast).

Idea #4: The lack of built in stats kind of stinks.

So I installed Google Analytics on our podcasting website and kept procrastinating on getting real stats related to the podcast itself for about three weeks. But when I finally did (they cost $5/month), it was like a whole new world was opened up to me. People listen to us in Romania? Most people are on iPhones? New York is second after Maine of the state with the most listeners?

Sure we had some idea of who was listening from the website stats but this other information, deeper and audio-specific information, is great.

Another fun thing I learned: iTunes won’t tell you as a podcaster about your subscriber data. They seem to be concerned about making things easy on the user end, not on the producer end. This is where installing audio feed stats is worth it. (Meanwhile Stitcher tells you lots, go Stitcher!)

Is version 1.0 of anything impressive? When you’re working on it, yes. When you have a bit of distance though, you can agree that of course it wasn’t fantastic.

Nina and I have decided to wait until episode 10 to officially monetize. Currently though, we have two 30 second ad spots for our respective businesses. This illustrates to potential advertisers that there are spots.

As we approach this arbitrary, self imposed deadline, we’re collecting mad stats to be able to put together advertising packages. (More about monetizing podcasts here.) We’re also getting to know our listener demographic, another great way to not only court advertisers but to have better content for listeners.

We went into this knowing we wanted to make money on it, but we weren’t in a hurry to do it until we got in a good grove.

Do I know everything? If you know me, you’ll know of course not. But I know enough now. Podcasting is actually kind of fun. It doesn’t seem to intimidate people the way video does but it’s also a very efficient way for people to get information. I look forward to learning more and, if in the meantime you want help getting set up, contact us as we can either set up the tech for you or we can add you to the list for our upcoming podcast workshop.