I’ve been on the whole video marketing bandwagon for at least six years. Even in its infancy, I had an introductory (terrible) video on the Breaking Even site so people could get to know me. Circa 2010 ya’ll:

(Wow, that was painful… but how awesome was my lime green kitchen? I mean really.)

I did videos sporadically but talking at a camera by yourself, well, it’s not very interesting (no matter how informative the material).

When Kassie started working here threeish years ago and she was also not opposed to doing video, we had a weekly Google Hangout for about a year. Since it was live, we stuck to a schedule- Thursdays at 10 a.m.- to take out any guesswork for our fans.

Here’s an example of how many people watched us: 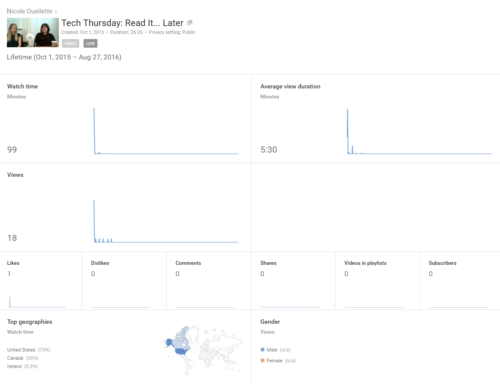 At first, I took it that people didn’t want to watch us. (Leave it to Self Deprecating Nicole to take it personally right away initially.)… Until I thought about it and realized 1) Not many people are generally using Google+ and 2) Our target customers tend to be not on this network anyway, and if they are, they most likely aren’t “on” it frequently enough to watch videos.

When Periscope (live video tied to Twitter) came out, we got a bit more popular: 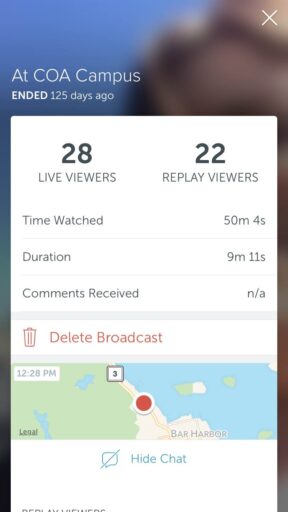 (I get that this is only 50 viewers compared to the 99 on Youtube but this was 1) way less promoted and 2) only available on mobile- while the other one is available everywhere so despite the number being smaller, I think it’s more impressive.)

So when Facebook Live came out, I was excited to be able to do the live video thing in front of our intended audience… though I am happy we got other practice first.

While the videos did get a lot of love, you may ask yourself, “OK Nicole but did anyone watch them?” An excellent question: 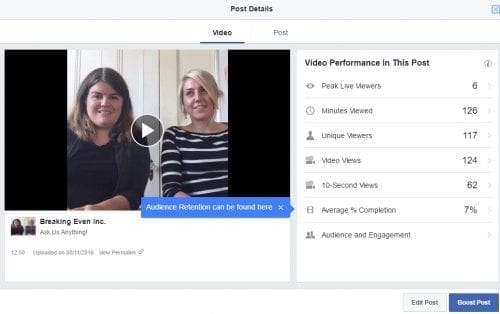 Ok so 7% of people (Alison King and maybe two other people) watched all the way through. And 62 our of the 124 video views only watched it for ten seconds.

Now this begs the question: does it MATTER if people watch the video? Or do you just want them to like, comment on, or share your post so more people see stuff from your business in a general way?

The answer in, my case, is both. Kassie and I thought about what we wanted to talk about but we didn’t work hard on scripting it (you see the stats of people watching it and probably get why). We come up with a few ideas that we think are interesting and will have value for viewers, but there’s nothing rehearsed about these recent videos.

What we can find the most compelling about Facebook Live (besides the fact that people actually seem interested in it), is that according to my sources, it is less expensive to ‘boost’ (re: paid advertise) a Facebook Live video then other kinds of Facebook posts.

So whether you are looking at this from a building relationships perspective, from a ‘viral content’ perspective, or cheaper advertising vehicle perspective, Facebook Live is something to watch and something we plan on continuing to experiment with. You can check out our live videos on our Facebook page, or check out this collection of 7 early Facebook Live experimenters (all brands) to get inspired for your own debut, should you choose!